The myth of the “surge” exposed in Basra 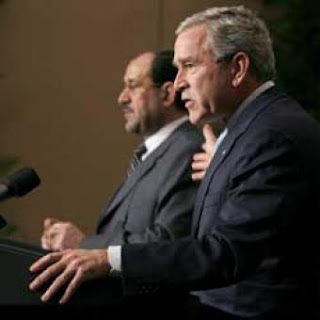 The fighting between Sayyid Muqtada al-Sadr’s Mahdi Army and Prime Minister Nuri al-Maliki's central government forces last week in Basra and Baghdad as well as the outcome leaving Sadr strengthened and Maliki weakened speaks poorly of the “surge” efforts by the U.S. With a decrease in violence over the past several months the Bush administration has declared the surge a success. Yet the whole point of the surge was to buy time for the central government to not only build up its own armed forces but to do the political work necessary to pull the country together. The outbreak of conflict over this civil war that has been simmering under the surface proves how little was actually accomplished.

Spencer Ackerman examines this failure in the Washington Independent:

… the surge was never intended to bring violence down to 2005 levels -- when, it's worth remembering, violence was so pervasive that the first wave of U.S. politicians reacted by calling for withdrawal -- nor to give Iraqi security forces the opportunity to skirmish with militias. President George W. Bush presented the surge to the American nation on Jan. 10, 2007 as an effort to enable political progress.
On that front, some experts say, Sadr's victory over Maliki exposed the weakness of the U.S.'s partner. "In spite of holding de jure power, Maliki can't exert territorial control over even the Shiite regions of Iraq," said Robert Farley, a professor at the University of Kentucky's Paterson School of Diplomacy. "While the surge has reduced violence, it has failed utterly to create Iraqi state capacity. The Iraqi central government is as far as ever from exerting control over other armed groups within Iraq."
Some in the Bush administration contended that a fact more significant than the Iraqi government's poor military capacity was Maliki's willingness to go after a co-religionist militia. Bush called it a "bold decision." CIA Director Michael Hayden called it "a very decisive act on the part of Prime Minister Maliki to get personally involved and commit his forces and his government to extending Iraqi government control over parts of Iraqi that, frankly, have not been under much central government control now for several years."
Brandon Friedman, who served in Iraq as an infantry officer with the 101st Airborne Division in 2003 (commanded at the time by Petraeus), disagreed. "It’s very clear now that -- after five years of American training and assistance -- the militias still wield more power and influence than any national, organized Iraqi military or police force," Friedman, who edits the veterans' advocacy blog VetVoice.com, wrote in an e-mail. "This is exactly what both Maliki and the Bush administration were trying to disprove last week. Unfortunately for them, they only succeeded in showing how inept and dependent the Maliki government is on outside forces."
Yet despite Sadr's strength, and Maliki's weakness, there is little likelihood of the U.S. abandoning Maliki. "Who's going to come out on top is still unclear, but obviously the U.S. is still going to support Maliki," said the U.S. intelligence analyst. "He's the hand the U.S. has been dealt. We have to back him because there's no alternative."
No matter what, however, the Bush administration insists that the surge is a success in the face of all evidence because to do otherwise would be to admit a blunder. And this administration has no record of admit(ing) to an error.

You can read his entire piece here.