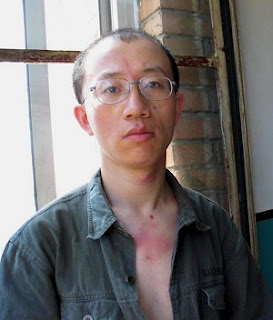 A young Chinese dissident who has been jailed for three-and-a-half years in a sentence for inciting subversion of state power by criticising the ruling Communist Party.
Hu Jia is a human rights activist and dissident in the People’s Republic of China. His activism has focused on democratic rights, enviromentalism, self-determination for Tibet and HIV/AIDS in China. (An English translation of his blog can be found here.)
On December 27, 2007, Hu Jia was detained as part of crackdown on dissent. The decision to take him into custody was made after peasant leaders in several Chinese provinces issued a manifesto demanding broader land rights for peasants whose property had been confiscated for development.
Today he was given three and a half years in jail on charges of "inciting subversion of state power" as one more attempt by the Chinese government to crack down on dissent prior to the Olympic games this summer.
Here is the BBC on Jia’s troubles:

A prominent activist who publicised human rights abuses across China has been convicted of subversion and jailed for three-and-a-half years.
Hu Jia, 34, was convicted of "inciting subversion of state power and the socialist system", his lawyer said.
He has long campaigned for the environment, religious freedom and for the rights of people with HIV and Aids.
His sentence comes a day after a rights group accused China of a campaign to silence dissent ahead of the Olympics.
****
Hu Jia's case has attracted a great deal of international attention, both from rights groups and Western diplomats.
Before his arrest late last year, he had been an outspoken critic of China's record on a variety of human rights issues.
Correspondents say he had become a kind of one-man clearing house for information, passing it on to journalists, organisations and foreign embassies.
Evidence presented against Mr Hu in court included interviews he gave to foreign media and political articles that he wrote for the internet, lawyer Li Fangping said.
"As lawyers we propose that Hu Jia appeal this sentence but it is up to him and we will wait for his decision," Mr Li said.
"We have not had a chance to exchange ideas with him so far."
Chinese state news agency Xinhua said the court had been lenient with Mr Hu because he had admitted his crimes.
"Hu spread malicious rumours, libel and instigation in an attempt to subvert the state's political and socialist systems," Xinhua said, quoting the court ruling.
Mr Hu's conviction comes only two weeks after another activist, Yang Chunlin, was jailed on similar charges.
On Wednesday, UK-based rights group Amnesty International accused Beijing of carrying out a "wave of repression" ahead of the Olympic Games.
The authorities were targeting those who criticised the government in a bid to present a stable and harmonious image when the Games began in August, the group said.
In response, the China Society for Human Rights Studies accused Amnesty of bias and of ignoring positive developments in the country's human rights record.
Last month, Chinese Premier Wen Jiabao was asked about Hu Jia's case. He said it should be handled according to the law.
"As for critics' view that China is trying to increase its efforts to arrest dissidents ahead the Olympic Games, I think all these accusations are unfounded," he said.

No freedom of speech in China.