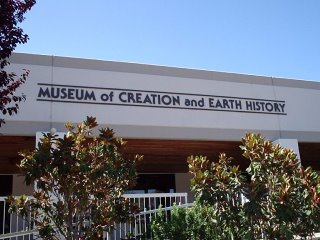 The first Creationist museum in the world is about to open outside of Cincinnati. The museum is dedicated to the creation of the world as described in Genesis. This includes those pesky dinosaurs whose bones keep showing up all over the world. They are shown here along humans in the world’s 6000-year existence. And, of course, Adam and Eve are positioned in such ways as to maintain their modesty – just the way God intended. They also have computer animation of how all those animals actually fitted in Noah’s Arc. They expect 300,000 visitors a year.

Stephen Bates reports for the Guardian:

Just off the interstate, a couple of junctions down from Cincinnati's international airport, over the state line in rural Kentucky, the finishing touches are being put to an impressive-looking building. When it is finished and open to the public next summer, it may, quite possibly, be one of the weirdest museums in the world.
The Creation Museum - motto: "Prepare to Believe!" - will be the first institution in the world whose contents, with the exception of a few turtles swimming in an artificial pond, are entirely fake. It is dedicated to the proposition that the account of the creation of the world in the Book of Genesis is completely correct, and its mission is to convince visitors through a mixture of animatronic models, tableaux and a strangely Disneyfied version of the Bible story.
Its designer, Patrick Marsh, used to work at Universal Studios in Los Angeles and then in Japan before he saw the light, opened his soul to Jesus, and was born anew. "The Bible is the only thing that gives you the full picture," he says. "Other religions don't have that, and, as for scientists, so much of what they believe is pretty fuzzy about life and its origins ... oh, this is a great place to work, I will tell you that."
So this is the Bible story, as truth. Apart from the dinosaurs, that is. As you stand in the museum's lobby - the only part of the building approaching completion - you are surrounded by life-size dinosaur models, some moving and occasionally grunting as they chew the cud.Beside the turtle pool, two animatronic, brown-complexioned children, demurely dressed in Hiawatha-like buckskin, gravely flutter with movement. Behind them lurk two small Tyrannosaurus Rexes. This scene is meant to date from before the Fall of Man and, apparently, dinosaurs.
Theological scholars may have noticed that there are, in fact, no dinosaurs mentioned in the Bible - and here lies the Creationists' first problem. Since there are undoubtedly dinosaur bones and since, according to the Creationists, the world is only 6,000 years old - a calculation devised by the 17th-century Bishop Ussher, counting back through the Bible to the Creation, a formula more or less accepted by the museum - dinosaurs must be shoehorned in somewhere, along with the Babylonians, Egyptians and the other ancient civilisations. As for the Grand Canyon - no problem: that was, of course, created in a few months by Noah's Flood.
But what, I ask wonderingly, about those fossilised remains of early man-like creatures? Marsh knows all about that: "There are no such things. Humans are basically as you see them today. Those skeletons they've found, what's the word? ... they could have been deformed, diseased or something. I've seen people like that running round the streets of New York."
Nothing can dent the designer's zeal as he leads us gingerly through the labyrinth of rooms still under construction, with bits of wood, and the odd dinosaur head occasionally blocking our path. The light of keenness shines from the faces of the workers, too, as they chisel out mountain sides and work out where to put the Tree of Life. They greet us cheerily as we pass.
They, too, know they are doing the Lord's Work, and each has signed a contract saying they believe in the Seven Days of Creation theory. Mornings on this construction site start with prayer meetings. Don't think for a minute that this is some sort of crazy little hole-in-the-corner project. The museum is costing $25m (£13m) and all but $3m has already been raised from private donations. It is strategically placed, too - not in the middle of nowhere, but within six hours' drive of two-thirds of the entire population of the US. And, as we know, up to 50 million of them do believe that the Bible's account of Creation is literally true.

You can read the entire article here.
Posted by Sisyphus at 12:50 PM

I'm all for animatronic dinosaurs hanging out with Adam & Eve playing gin rummy. But good grief.

Why is it that feeding the poor has become a "christian" thing? Annually christian's spend billions of dollars on social projects. Why is it that if they spend it on something besides social programs it is considered "atrocious" or better spent elsewhere? Americans spend billions of dollars fattening up our butts on McD's and other junk. That money could certainly be better spent to help others but that is not being attacked or ridiculed.

The same accusation could be directed at the Smithsonian Institutes. How many people could be fed in our own country with the money spent on those respected institutions? The fact that we can spend our money on the organizations we consider worthy is part of what makes America great. We have the right to express our beliefs and opinions in ways that may not be agreeable to others.

Just a point of clarification for my part: spending their money on this museum isn't what's atrocious; the museum itself is atrocious. It would be so even if they'd spent $0.

How very american christian, lets build a museum based on something that isn´t fact and then claim it is. I do wonder, will there be a Harry Potter museum, with claims that it is real? We are laughing all through Europe...