Guns in the national parks 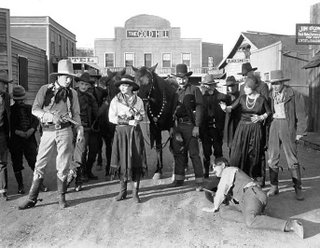 As hard as Republicans work at it the Republican Party can never monopolize bad ideas. Granted they can claim ownership of most bad ideas but there are a few that have bipartisan appeal. I speak of course about legislation to allow individuals to carry concealed weapons in our national parks.

As pointed out here the day before yesterday, Senator George Allen has introduced legislation to permit the carrying of concealed firearms in our national parks. Today, the Richmond Times-Dispatch carried a story about the Allen proposal that mentioned Senator-elect Webb also favors such legislation. According to the article:

In a twist, an Oct. 30 campaign letter by Jim Webb -- the Democrat who narrowly defeated Allen -- shows that he promised to introduce similar legislation.
"And I intend to get it to the floor for a vote," added Webb, who also noted his possession for many years of a concealed-carry permit and his regular shooting activity. A spokesman for the senator-elect said Wednesday that Webb had not studied the Allen bill.

Of course, neither past nor future Virginia Senator has offered any reason in the press as to why this is necessary.

Concealed weapons would be less of a bad idea if everyone carrying a gun were trained in its use, was cautious and had a level headed personality, were not one to panic when the unexpected happens, were not one quick to anger when the unpleasant occurs, and strictly adhered to all safety rules. However, I can see campground disputes turning into shootouts, kids tossing bullets into campfires, certain people succumbing to the temptation for a little target practice while hiking in the woods, etc. Like Liberal Progressive, I just don’t see why Virginia’s representatives need to spend their political capital for something that will make our national parks less safe and desirable for the public at large.

More than 2/3's of the states allow "everyday people" to carry concealed weapons and the doom and gloom predictions of the anti-self-defense crowd have failed to materialize. In fact studies show that, as a group, "everyday people" licensed to carry concealed weapons are more law abiding and less likely to shoot the wrong person than the police. Your fear of licensed concealed carry just does not hold up when compared to reality.

"There are reasons why those who can currently carry weapons — police — have to go through such extensive training."

Sorry to break the news to you, but police are only required to "Qualify" with their pistols no more than twice a year. Few officers fire their weapons for practice until their re-qualification is coming up. Most "cowboys with a handgun" fire more practice round at the range in 6 months than most officers fire throughout their careers.

Fact: Thirty five states1 (and the majority of the American population) live in “right-to-carry” states, and in each the crime rate fell (or did not rise) after the law became active (as of July, 2006). Three more states generally issue permits, though it is optional ("do-issue").

Fact: Crime rates involving gun owners with carry permits have consistently been about 0.02% of carry permit holders since Florida’s right-to-carry law started
in 1989.2

Fact: More to the point, crime is significantly higher in states without right-to-carry laws4:

Fact: Deaths and injuries from mass public shootings fall dramatically after right-to-carry concealed handgun laws are enacted. Between 1977 and 1995, the average death rate from mass shootings plummeted by up to 91% after such laws went into effect, and injuries dropped by over 80%.

1 At publication time two more states, Kansas and Nebraska, have pass shall-issue legislation, but the new laws have not yet taken effect.
2 Florida Department of Justice, 1998
3 Cramer C and Kopel D. Shall issue: the new wave of concealed handgun permit laws. Golden CO: Independence Institute Issue Paper. October 17, 1994
4 John Lott, David Mustard: This study involved county level crime statistics from all 3,054 counties in the U.S., from 1977 through 1992. During this time ten states adopted right-to-carry laws. It is estimated that if all states had adopted right-to-carry laws, in 1992 the US would have avoided 1,400 murders, 4,200 rapes, 12,000 robberies, 60,000 aggravated assaults – and saved over $5,000,000,000 in victim expenses.
5 FBI, Uniform Crime Reports, 2004 - excludes Hawaii and Rhode Island - small populations and geographic isolation create other determinants to violent crime.

Concealed Weapons in the Wilderness
by Steve Chapman
Posted Nov 26, 2006

Lots of kids, when very young, worry about monsters under the bed. Even when Mom or Dad comes in to reassure them, the kids may still worry. But as they get older, they begin to check under the bed themselves. And eventually, after many monster-free nights, they figure out that the danger is purely imaginary, and they stop worrying.

You would think by now gun control supporters would have made the same progress on one of their most fearsome demons: the licensing of citizens to carry concealed firearms. But they seem to be trapped in a recurring nightmare that exists only in their minds.

So imagine their alarm at a bill recently introduced in Congress that would allow people with concealed-carry permits take weapons into their home state's national parks. The indefatigably anti-gun New York Times warned that the measure is a step toward "nationalizing the armed paranoia that the National Rifle Association and its cohorts stand for" and "can only endanger the public."

Such fears may have been plausible once upon a time -- when Americans were generally not allowed to carry firearms. But since 1987, when Florida decided to let law-abiding citizens get concealed-carry permits, that has changed. Today, some 40 states have such "shall-issue" laws. They've become the norm, and the fears they inspired have proved unfounded.

As it happens, serious crime has waned in the intervening years. Murders are now at their lowest level since the 1960s. Violent crime has been cut by nearly 60 percent since the peak year of 1994. Gun crimes have plunged as well.

It may not be true, as some experts believe, that America has gotten safer because more people are legally packing heat. But it's impossible to claim that the change has made us less safe.

At the outset of this experiment, gun opponents forecast that hot-tempered pistoleros would spray bullets at the slightest provocation, requiring the rest of us to wade through rivers of blood just to cross the street. In fact, one of the most conspicous facts about handgun licensees is their mild temper. It's rare for them to commit crimes, and even rarer for them to use their firearms to commit crimes.

A report by the Texas Department of Public Safety found that in a state with more than 200,000 people licensed to carry guns, only 180 were convicted of crimes in 2001, and most of those crimes didn't involve firearms. Only one licensee was convicted of murder. Florida, which has nearly 400,000 permit holders, revoked only 330 licenses last year -- about one out of every 1,200.

This record should not be surprising. As a rule, concealed-carry licenses are off-limits to anyone with a history of crime, substance abuse, drunk driving or serious mental illness, and most states require safety training. In any case, people who are inclined to commit mayhem generally don't seek state licenses to carry guns, any more than they ask permission to break into houses or beat up girlfriends. It's the law-abiding folks who apply for licenses.

Why would these peaceable souls want to take their guns when hiking or camping in a national park? Same reason they might take them other places: a desire to protect themselves. Though federal lands are mostly safe, they sometimes play host to crime. In fact, park rangers are far more likely to be assaulted or killed than FBI agents.

The Times says, "If Americans want to feel safer in their national parks, the proper solution is to increase park funding, which has decayed steadily since the Bush administration took office." Maybe that would help, but we can't put a park ranger at every bend in the trial. And if you run into a thug deep in the backcountry, you can't expect the police or anyone else to come to the rescue.

For some people -- solitary women in particular -- having the means of self-defense in the woods can be not only a comfort but a lifesaver. It's fine to trust in one's fellow man. That doesn't mean it's paranoid to have a Plan B.

Judging from a wealth of experience, adopting this new policy would be a non-event, with no unwanted repercussions. The only danger it poses is to criminals, who would lose some easy prey, and anti-gun zealots, who would once again be proven wrong.