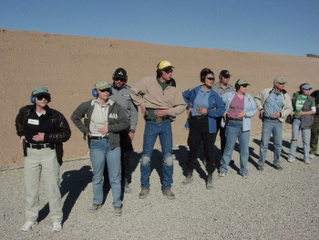 Concealed weapons in national parks? Senator George Allen intends to end his Senatorial career with a bang by introducing legislation granting a right to park visitors to carry concealed weapons as they enjoy our nation's public recreational areas. Presumably park visitors need to be armed to protect themselves against terrorists, bears or park rangers. Regardless of the reasoning for this bill the result will only make our national parks dangerous for the public. It is a very bad idea.

This from today’s New York Times:

As a last little gift to America, Senator George Allen, who was narrowly defeated by James Webb this month, has introduced what may be his final piece of legislation: a bill that would allow the carrying of concealed weapons in national parks. The argument behind the bill is that national park regulations unfairly strip many Americans of a right they may enjoy outside the parks. The bill has passed to the Senate Committee on Energy and Natural Resources, where we hope it will die the miserable death it deserves.
America’s confusion about the Second Amendment is now nearly total. An amendment that ensures a collective right to bear arms has been misread in one legislature after another — often in the face of strong public disapproval — as a law guaranteeing an individual’s right to carry a weapon in public. And, in a perversion of monumental proportions, the battle to extend that right has largely succeeded in co-opting the language of the Civil Rights movement, so that depriving an American of the right to carry a gun in public sounds, to some, as offensive as stripping him of the right to vote. Senator Allen’s bill is, of course, being cheered by the gun lobby, which sees it not as an assault on public safety but as a way of nationalizing the armed paranoia that the National Rifle Association and its cohorts stand for.
If Americans want to feel safer in their national parks, the proper solution is to increase park funding, which has decayed steadily since the Bush administration took office. To zealots who believe that the Second Amendment trumps all others, the parks are merely another badland, like schools and church parking lots, that could be cleaned up if the carrying of private weapons were allowed. The concealed-weapon advocates are doing an excellent job of sounding terrified by “lonely wilderness trails.” But make no mistake. Senator Allen’s bill would make no one safer. It can only endanger the public.