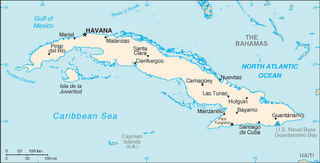 The U.S. relationship with Cuba has always been problematic. The U.S. was certainly helpful to the Cuban people in kicking the Spanish out but then could never seem to leave the island alone following the Spanish American War. Although not annexed like Puerto Rico or militarily occupied like the Philippines, the U.S. always seemed to keep its finger in Cuban politics to an extent creating a strong anti-American backlash. Fidel Castro rode this sentiment to power during the overthrow of the Batista government in 1959. Castro aligned Cuba with the Soviet bloc and relations deteriorated from there.

Castro has been well known for his abuse of human rights – in particular the suppression of political dissent and homosexuals. His rule has been absolute for 47 years. But the Castro dictatorship will soon come to an end with old age succeeding where the CIA failed. What will happen politically in Cuba is anyone’s guess right now.

Regardless of the pros and cons of American policy towards Cuba in the past, that policy makes no sense now. The Cold War is over. The Castro regime is no longer meddling in the affairs of other countries as it once was. (And, this observation is not to overlook U.S. meddling.) The Cuban people have suffered under trade restrictions. It’s time to open up to Cuba. We don’t have to worry about propping up Castro – his rule is near its end regardless of what we do. It is in our interest economically and politically to normalize relations with the largest nation in the Caribbean.

Wayne Smith, who was at the U.S. embassy in Cuba from 1958 to 1961 and was chief of mission at the U.S. Interests Section in Havana from 1979 to 1982, has published a piece in today’s Guardian arguing for normalization:

The annual vote in the UN general assembly on the US embargo against Cuba is back this month. Last year's result saw 182 member states oppose the blockade, with only four - the US, Israel, the Marshall Islands and Palau - voting in favour. The embargo, and indeed overall US policy towards the island, have virtually no international support. No wonder: it is a failed approach.

The essential elements of the embargo have been in place since 1960. As recently declassified documents confirm, the objective of the policy since the beginning has been to bring about the downfall of the Castro regime, an ambition pursued in vain for 46 years.

Early on, there may have been some logic to US efforts to isolate Cuba and bring down its government - at a time, that is, when Fidel Castro was trying to overthrow the leaders of various other Latin American states and moving into a relationship with the Soviet Union, one that led to the missile crisis in 1962. But all that is now ancient history. Castro has built normal, peaceful diplomatic relations in the region, while any threat posed by the so-called Cuban-Soviet alliance ended with the demise of the Soviet Union more than a decade ago.

And yet the Bush administration's policy towards Cuba is more hostile than ever. This despite the fact that, immediately after the terrorist attacks of September 11 2001, Cuba expressed its solidarity with the American people. It subsequently called for dialogue on joint efforts against terrorism. It also signed all 12 UN resolutions against terrorism.

Surely these overtures were worth exploring. But, no, the Bush administration rejected them out of hand and instead began calling for the downfall of the Castro government. As Roger Noriega, the assistant secretary of state for Western Hemisphere Affairs, put it in October 2003: "The president is determined to see the end of the Castro regime, and the dismantling of the apparatus that has kept it in power."

To bring that about, the administration appointed a Commission for Assistance to a Free Cuba, which, in May 2004, produced a 500-page action plan for the removal of the Castro government and for what sounded worryingly like the US occupation of Cuba: how to make their trains run on time, how to reorganise their schools, and so on. Shortly thereafter, it even appointed a US "transition coordinator". As Jose Miguel Insulza, the Chilean secretary general of the Organisation of American States remarked, "But there is no transition - and it isn't your country."

The underlying premise of the document was that the regime was on the verge of collapse. Just a few more sanctions and it would all crumble.
****

Bush's is not only a failed policy, it is one which does considerable harm. The US should want to see Cuba move towards a more open society, yes, with greater respect for the civil rights of its citizens. But given that the US has since 1898 been the principal threat to Cuban sovereignty and independence, any time it is threatening and pressuring the island, the Cuban government will react defensively, urging discipline and unity - which doesn't encourage internal relaxation and liberalisation.

US policy, then, is actually an impediment to precisely the kind of liberalising changes the US - and its European allies - should wish to see in Cuba. And given the counterproductive nature of US policy, any country that supports that policy in effect works against positive change in Cuba.

Somehow Cuba has to evolve away from Stalinism and into a social democracy, say along the lines of Venezuela or even Uruguay or Brazil. The alternative would be chaos, the return of the Miami Mafia, thousands of vengeance killings, the abolition of social services and Cuba as the whore house of the Caribbean once again. But I think the sociopaths running the US at the moment would like a democratic socialist Cuba even less than a Castro-Stalinist one. Their real wish is the sort of gangster capitalism that ocurred with the collapse of the USSR. This would explain why their policies seem designed to make sure Cuba does not have a "soft landing" after Castro goes.