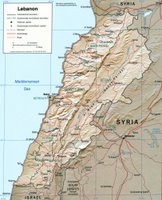 The lesson learned from the hapless Neville Chamberlain’s failed efforts to prevent the outbreak of war at Munich in 1938 seems to have been over-learned or not kept in perspective. We forget that Chamberlain was desperate not to repeat the horror of World War I. In the summer of 1914 the assassination of Archduke Franz Ferdinand of Austria in Sarajevo sparked a series of reactions that spiraled out of control and led to almost all of Europe being engulfed in war. In dealing with our enemies we must not forget Munich 1938 but we must never forget Sarajevo 1914 either.

Israel is entirely justified in defending itself. It is worth remembering that Israel, after withdrawing from Gaza recently has suffered repeated missile attacks over the past year from Hamas and, after having withdrawn from southern Lebanon a few years ago, has seen a Hezbollah buildup along the northern border despite a United Nations’ resolution to disarm Hezbollah and the inability or unwillingness of the Lebanese government to do anything about it. The across border attacks on military outposts and kidnapping of soldiers have been only the most recent provocations.

That said, wars have unintended consequences not the least of which much larger wars than either side initially anticipated. Is the situation in the Middle East about to spiral out of control into a much larger regional war? That may or may not happen but it is a distinct possibility. Will Israel’s actions force Lebanon join Palestine as a failed state? That is in no ones interest, particularly Israel’s. Is the lack of diplomatic leadership by the United States making these scenarios more likely?

President Bush's remarks the other day about the need for Syria to pull Hezbollah back is simply wrong. First, we don't want Syria involved in Lebanon and neither do the Lebanese. Second, even if they had this power over Hezbollah, it's not in their interest to have them pull back so we would be fools to depend upon them. The big player here is Iran and we are not talking to Iran. Presently the Bush administration is taking the go slow approach hoping to give Israel time to destroy Hezbollah. The problem with this approach is its passivity and weakness. We are not taking control of events – rather events are in control of us.

From today's online publications are some thoughts below on the matter by various writers.

This is from David Ignatius in the Washington Post today. You may read his entire column here:

Bush's slow-motion diplomacy is partly an effort to allow Israel time to destroy as much of Hezbollah's arsenal of missiles as it can. But what comes next? Israeli officials talk of accomplishing what the Lebanese government would do itself, if it had the power -- which is to break the power of the Shiite militia. That's a worthy goal -- Hezbollah has it coming -- but one that is almost certain to fail. Lebanon is as thankless a battlefield as Iraq, as the Israelis well remember. They were initially welcomed as liberators by the Shiites when they invaded in 1982 -- only to be pinned down by Hezbollah's resistance movement and forced to retreat. Only a compulsive gambler would think the odds are any better this time.

Rather than bringing positive change, military action in the Middle East tends to bring unanticipated consequences. In this case, one wild card is the Shiite population of Iraq -- America's crucial ally there. If the Israeli campaign against Hezbollah stretches to weeks and even months, how long will it be before the U.S. faces a Shiite insurgency in Iraq, which would almost certainly spell a decisive American defeat there? And, ominously, CIA and FBI officials are said to be hearing increased "chatter’ about new terrorist attacks in America.

When international crises arise, analysts often cite the tragic chain of events that produced World War II -- Neville Chamberlain's policy of appeasement that emboldened the Nazis and led to the slaughter of tens of millions. The 1938 Munich lesson of the necessity for action is indelible. But it's also worth considering the lesson of August 1914, in which the world slipped toward a senseless war that could have been avoided had statesmen escaped the lockstep chain of action and response.

Are we living through a Sarajevo moment, like the concatenation of events that marched Europe toward World War I? Impossible to know. But given the risks for the United States and its allies, this ought to be a week when Americans are aggressive, active diplomats, rather than bystanders. If America means to be a world leader, it cannot appear to be a prisoner of events.

This is from Thomas Barnett’s weblog. You read the entire article here:

Our tie-down in Iraq is real, and everyone in the region knows it, so if we're not willing to engage the larger regional security agenda (and that's the signal we send with this myopic focus on WMD that's perverted our foreign and security policies almost like abortion has perverted our foreign aid agenda), then we give off the vibe that our diplomacy is fake, largely designed to buy time and consensus for ultimate military action. And guess what? The pigeons in question aren't going to wait around for that plan to unfold on Bush's watch, so they socialize their problem quite effectively through Hamas and Hezbollah.

As the NYT article pointed, it gets tough to seek diplomatic solutions when your basic foreign policy strategy is that we don't talk directly to rogues, we just threaten them and let others speak on our behalf.

Right now our approach comes off as rather bassawkwards: we decide who's bad and we threaten them directly, then we sort of backtrack to having our key allies (basically the G-8 crowd plus China) try and work the diplomacy. But we're leading with the military threat as the big prod both to our enemies and our allies, and that puts both in the position of being reactive, so the dialogue stays rather stale when our focus is so heavy on just this notion of WMD prevention.

Russia and China, no surprise, are acting like they won't let us track this war back to Iran. That leaves Assad as the weak link, so our focus will likely turn there. But if it does, Iran's already won what it really wanted: to move this discussion off their WMD pursuit, pushing the conversation back in the direction of
Israel.

When I wrote last year in Esquire that Iran can basically veto our peace efforts in Beirut and Baghdad and Jerusalem, this is exactly what I had in mind. We go myopic, they socialize the problem, and our only option is diplomacy to achieve the same ends that we earlier vowed never to accept, or we fight, which we can't really pull off right now.

Iran remains the key, but this Administration hasn't expressed any interest in trying to unlock that particular door, so this war is what gets lobbed over the transom instead, and now Israel is running America's Middle East policy--which is exactly where Tehran wants us.

This is from John Judis in the New Republic. You may read the entire analysis here:

In their communiqué on Sunday, the G-8 nations warned that Hamas and Hezbollah threatened to "plunge the Middle East into chaos and provoke a wider conflict," and they also cautioned Israel "to exercise utmost restraint" in retaliating against attacks. The United States was a signatory to, rather than a subject of, the document; but when the final account of this crisis is written--perhaps years from now--the Bush administration is sure to figure as a factor. That's because over the last few decades most, if not all, Arab-Israeli crises have occurred when the United States has been either unable or unwilling to play an aggressive role as a mediator;
and most have only abated after the United States has finally thrown itself into the middle of them. This latest conflict, which has engulfed Gaza and Lebanon and could spread eastward, may not prove to be an exception to this rule.