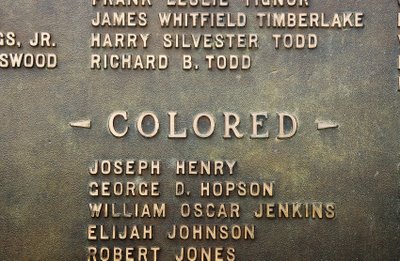 Virginia Reports is the title of a series of law books documenting decisions of the Virginia Supreme Court. The first sentence of the first case in the first volume, Marston v. Parish, decided in April of 1730 reads: “John Williams was possessed of two Negro boys, Arthur and Billy, and two Negro women, Dinah and Nanny, and made his last will the 22nd of April, 1713.” The report goes on to explain that Mr. William’s widow married twice before passing away herself. In the meantime, the four slaves above had three children between them. One of Ms. William’s heirs brought the case over the issue of who owned which slave.

Slavery, over the history of mankind, has taken different forms. In this country slavery was most identified with Africans and the evolving concept of race. What is remarkable about the above case is the matter-of-fact report of the facts of the case without even a hint that speaking of human beings as chattel was in any way strange let alone wrong. Slaves were simply not considered fully human and when slavery ended, racism continued to assign a “badge of slavery.”

Virginia certainly shares a place in the sad history of slavery and race relations in the United States.

ond near Byrd Park at the point where Boulevard curves around the tennis courts to intersect with Blanton Avenue, there is a flagpole. The flagpole was erected in 1926 as a memorial to the Richmond soldiers who died in the First World War. At the base of the flagpole are four plaques. The main plaque reads “They Gave Their Lives 1917-1918.” The other three plaques list the names of Richmond soldiers who died. The names on one plaque are divided by the word, “Colored,” indicating the names following were not white men. Remembering this memorial was erected in 1926 when Jim Crow reigned in Virginia, perhaps this was the best they could do at the time to honor those soldiers. However, eighty years later there is something offensive about dividing those brave men by that word. They died on the same battlefields wearing the same uniforms. The hues of their skin may have differed somewhat but their blood was equally red.

The impact of racism assigning the badge of slavery has had a devastating impact on our social order creating and maintaining various levels and degrees of injustice. Traditions die hard because we are the products of the past. Yet we have the intellect to recognize injustice and the power to act. We owe it to Arthur, Billy, Dinah and Nanny. 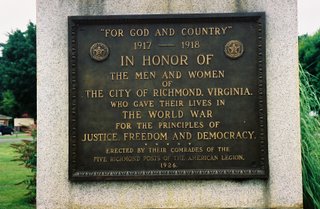 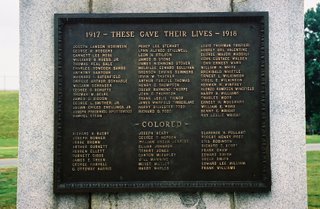 Many people are quite unaware that Virginia's cash crop at that time was not tobacco, but slaves.

Virginia's long history of prejudice and racism is hard to hide.