Civil war in Iraq -- What do we do next? 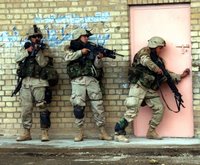 In a New York Times op-ed piece today, Peter Galbraith argues that the Bush administration’s neglect of the necessary political work during the formal occupation has allowed the country to spin off in three different directions. (This is an argument he makes in his new book. I reprinted a few paragraphs in my post of 7/17/06 here.) He says,

WHAT is the mission of the United States military in Iraq now that the
insurgency has escalated into a full-blown civil war? According to the Bush
administration, it is to support a national unity government that includes all
Iraq’s major communities: the Shiites, Sunni Arabs and Kurds. O.K., but this
raises another question: What does the Iraqi government govern?

In the southern half of Iraq, Shiite religious parties and clerics
have created theocracies policed by militias that number well over 100,000 men.
In Basra, three religious parties control — and sometimes fight over — the
thousands of barrels of oil diverted each day from legal exports into smuggling.
To the extent that the central government has authority in the south, it is
because some of the same Shiite parties that dominate the government also
control the south.

Kurdistan in the north is effectively independent. The Iraqi Army
is barred from the region, the Iraqi flag prohibited, and central government
ministries are not present. The Kurdish people voted nearly unanimously for
independence in an informal referendum in January 2005.

And in the Sunni center of the nation and Baghdad, the government
has virtually no control beyond the American-protected Green Zone. The Mahdi
Army, a radical Shiite militia, controls the capital’s Shiite neighborhoods,
while Qaeda offshoots and former Baathists are increasingly taking over the
Sunni districts.

Rather than try to put Humpty Dumpty back together again at this late date, he recommends working with the separate entities as such. He says Kurdistan is essentially already operating as a separate country and the Shiite south is not far behind. The Sunnis of central Iraq should be encouraged to form their own security forces since they are distrustful of Shiite dominated Iraqi security forces. The United States could then operate out of bases in Kurdistan to tackle any Al Qaeda operatives who may use the chaos in the Sunni region to set up shop.

Maybe a de facto Iraqi partition after more bloodshed and sectarian
massacres may pave the way for a more peaceful future. We can hope. But
Baghdad is fast turning into what Beirut once was - a cualdron of unrestrained
sectarian hate and violence, fomented by a few empowered by the incompetence in Washington. I'm left with contrition at my own small contribution to the
misunderstanding; and abiding, deep, and furious anger at the administration
who conducted this war with such arrogance and negligence. This president's
betrayal of the Iraqis, his betrayal of the armed forces, his betrayal of
those who supported him, is profound. Some of his supporters will forgive
him. This much I'm sure of: History won't.