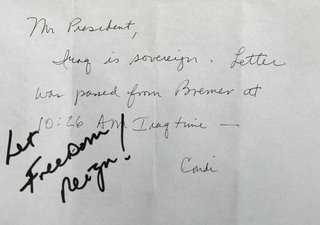 I must admit I have mixed feelings about the partition of Iraq. Would Turkey tolerate an independent Kurdish state on its border? Would Saudi Arabia tolerate a Shiite state, quite possibly within Iran’s orbit, on its border? Would the Sunni center deteriorate even more than it has into another Afghanistan destabilizing countries on its borders in every direction?

I have not read Peter Galbraith’s new book, The End of Iraq: How American Incompetence Created a War Without End, yet. However, there was a short extract in yesterday’s London Sunday Times and I do find his argument very interesting. In a nutshell, he makes the case that Iraq was the creation of the British following WWI when they slapped together what had previously been three different domains under Ottoman rule. The history of the country is one of violence as the three communities have struggled against one another from the beginning. It is too much to expect the fragile and weak Iraqi government to hold the country together when the Coalition Provisional Authority, with the full power of the U.S. and British armies to back it up when it ruled the country briefly, failed to disarm militias or quell the separatist sentiments. Galbraith argues we should help arbitrate an amicable divorce.

The conventional wisdom holds that Iraq’s break-up would be
destabilising and should be avoided at all costs. Looking at Iraq’s dismal
history since Britain cobbled it together from three Ottoman provinces at the
end of the first world war, it should be apparent that it is the effort to hold
Iraq together that has been destabilising.

Pursuit of a coerced unity under Sunni-Arab domination — from the
first British-installed king to the end of the Saddam Hussein dictatorship in
2003 — has led to endless violence, repression and genocide.

I do not believe it is possible in the long run to force people living in a geographically defined area to remain part of a state against their
will. Certainly Iraq’s Kurds will never reconcile themselves to being part of
Iraq. Under these circumstances I believe that a managed amicable divorce is in
the best interests of the peoples of Iraq and will hasten American and British
withdrawal.

Even when America and Britain had full legal authority in Iraq in
2003 and 2004, they did nothing to arrest the break-up of the country.

In the south they allowed the Shi’ite clergy and religious parties
to take power and to build their Islamic states. While saying that Kurdistan
should rejoin Iraq, America did nothing to reduce any part of Kurdistan’s
autonomy. While outlawing armed forces that were not part of the Iraqi army, the coalition allowed militias to proliferate.

If the coalition could not prevent Iraq’s unravelling when it was
fully in charge of the country, it is illogical now to put all the emphasis on
building strong national institutions, such as a single Iraqi army and powerful
central government, when American influence is much diminished.

In sum: partition works as a political solution for Kurdistan, the
Shi’ite south and the Sunni Arab centre because it formalises what has already
taken place. By contrast, the American effort to build a unified state with a
non-sectarian, non-ethnic police and army has not produced that result nor made
much progress towards it.

There is one remaining problem. Partition is a way to get most
coalition forces out of Iraq quickly. It does not solve the problem of Baghdad,
however.

Theoretically, the United States has the power to provide some
level of security in Baghdad. This would require many more troops and result in
many more casualties. And it might not work. It is hard to imagine that there is
any support for this role in America.

The alternative is to recognise that there is not much that America
is able and willing to do to stop the bloodshed in Baghdad. Once they get
started, modern civil wars develop a momentum of their own. In Baghdad and other mixed Sunni-Shi’ite areas, America cannot contribute to the solution because there is no solution, at least not in the foreseeable future.
It is a tragedy and it is unsatisfying to admit that there is little that can be done
about it. But it is so. No purpose is served by a prolonged American presence
anywhere in Arab Iraq.

I still have mixed feelings and do want to read the book. If nothing else this idea at least is a creative alternative to the present policy of just muddling along.

You may read the London Sunday Times piece here, a short New York Times Magazine interview here and a review of the book by Christopher Hitchens here.
Posted by Sisyphus at 8:34 PM

It was never an option in the elections....

About a fifth of Syria is Kurdish and the Kurds do not enjoy full rights of citzenship in Syria...

More than 200,000 Kurdish people in Syria are denied a nationality and passport. These stateless Kurds are denied some basic economic and social rights. They aren’t allowed to own a house, land, or a business. They can’t work as lawyers, journalists, engineers or doctors. Many are not allowed to study in school after the age of 14, and often they’re not allowed treatment in state hospitals.

I could make a case for partitioning Syria tonight.