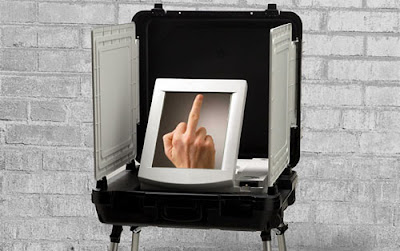 James Fallows does the math on the system of American governance:

- The post-Constitutional patterns of population growth, which leave California with nearly 37 million people and Wyoming with just over half a million; and

- The very recent practice of subjecting almost every Senate action to the threat of filibuster, which requires 60 votes to surmount...

So in reality, what's the population balance? Counting the new Republican Senator Scott Brown from Massachusetts, the 41 Republicans in the Senate come from states representing just over 36.5 percent of the total US population. The 59 others (Democratic plus 2 Independent) represent just under 63.5 percent. (Taking 2009 state populations from here. If you count up the totals and split a state's population when it has a spit delegation, you end up with about 112.3 million Republican, 194.7 million Democratic + Indep. Before Brown's election, it was about 198 million Democratic + Ind, 109 million Republican.)

Let's round the figures to 63/37 and apply them to the health care debate. Senators representing 63 percent of the public vote for the bill; those representing 37 percent vote against it. The bill fails.

This is just as a point of information. The Constitution was designed as a system of checks and balances. As explained in my article, that image is being replaced by one of brakes:

"In their book on effective government, William Eggers and John O'Leary quote a former deputy mayor of Los Angeles, Michael Keeley, on why the city is out of control. "Think of city government as a big bus," he told them. "The bus is divided into different sections with different constituencies: labor, the city council, the mayor, interest groups, and contractors. Every seat is equipped with a brake, so lots of people can stop the bus anytime. The problem is that this makes the bus undrivable." "

During the next election cycle when you hear someone say their vote doesn’t count, think long and hard about your response.
Posted by Sisyphus at 9:56 AM

Especially in view of the recent Supreme Court screw-up, we need to write to our Delegates and demand CAMPAIGN FINANCE REFORM that will restore the representative relationship between the citizens and their elected representatives. Cut and paste these items and send them to your Delegate:

If we want the voices of the citizens of each district to again be heard by elected officials, we must take the following steps:

3. Eliminate corporate contributions. Corporations are profit-making entities whose by-laws mandate that they expend money only with the expectation of a return on that investment. Corporations, in spite of their public relations propaganda exist only to make money and are not, “corporate citizens.” Only People are citizens.

We're the one being checked, and balance is nowhere to be found.