The challenge for President Obama after the Massachusetts special election 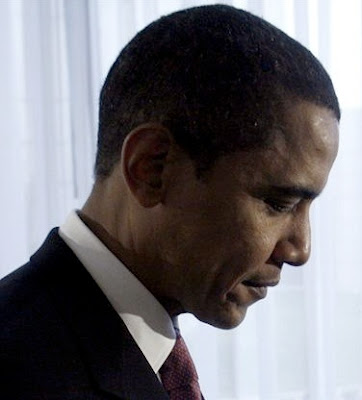 The upset victory by a little-known pro-torture and anti-health-care-reform Republican for the late Senator Kennedy’s Senate seat in Massachusetts has stunned Democrats across the nation. There is the local element of the quality of candidate and how she ran their campaigns (as we are painfully aware in Virginia after last November) to take into consideration but it is also seen as a message about the President’s leadership after one year in office. Despite majorities in both houses of Congress, some Democrats seem spooked by last night’s election results. There is also a sense that the Democrats may be losing the appeal to independent voters who flocked to them in 2008.

As John Judis points out, President Obama shares a fair amount of the blame for this political crisis. The country is in two wars and a devastating recession. While calculations may have been rational they often seem to lack the passion and clarity of his campaign rhetoric. This is not nostalgia for former President Bush’s often child-like comic-book presentation of the world in black and white. American voters are adults and can understand nuance in a world of shades of gray. And granted the American dual-legislative process, with one body unrepresentative of the public and burdened by self-imposed rules to thwart democracy, is simply screwy and a challenge to any elected leader.

That said, the Rube Goldberg legislative system has been made to work before. Social Security and Medicare faced significant challenges but passed and remain popular. They were reforms that were easy to understand and affected everyone – unlike the current health care reform effort. And President Obama proved during the campaign his superb communications skills.

Whatever the shortcomings of the current health care proposals it is important that the White House and Congress proceed in the process that has been ongoing since last summer. The results of a special election in a single state cannot be allowed to derail this legislation. There are two things American voters especially dislike in their political leaders: cowardice and flip-flopping. If health care reform was important last week then it remains important this week.

Josh Marshall has these thoughts:

In the spirit of bipartisanship the president admires, let's go back to President Bush in 2006 and 2007. The Republicans and the president were hit with a staggering defeat in November 2006 in an election fought overwhelmingly on public dissatisfaction with the Iraq War. The president said that he'd heard the people's message and proceeded to dramatically expand the US troop commitment in Iraq.

What you think of the surge is a separate point. But the example is an instructive one. Especially because it's an example that President Obama could follow with a far better argument that he is listening to the message of the people than President Bush ever had with Iraq.

The central problem the president is laboring under is the fact that the economy remains in a shambles. And unemployment remains at a toxic 10%. Beyond that though the Democrats are suffering because they have shown voters an image of fecklessness and inability to deliver results at a moment of great public anxiety and suffering. Big changes provoke great anxiety, especially in such a divided society. But Democrats are not just having dealing with the ideological divisions in the country -- which is what the Tea Party movement is about. They're also losing a big swathe of the population that is losing faith that the Democrats can govern, that they can even deliver on the reforms and policies they say are necessary for the national good. As I wrote earlier, this is about meta-politics. If the Democrats, either from the left or the right, walk away from reform, they will get slaughtered in November. They'll get it from the people who want reform, from the people who never wanted reform and from sensible people all over who just think they can't get anything done.

What the Democrats -- and a lot of this is on the White House -- have done is get so deep into the inside game of legislative maneuvering, this and that 'gang' of senators and a lot of other nonsense that they've let themselves out of sync with the public mood and the people's needs.

The president needs to find way to say, we've heard you. We've gotten so focused on working the Washington channels to get this thing done and we need to be more focused on the public's mood and urgency. Well, we've heard you. We're going to stop playing around and get this thing done. And then we're going to work on getting Americans back to work. We know the urgency of the moment and we know you expect results.

…. This is the biggest testing time the president has yet faced. It could be a key turning point in his presidency. Over the next forty-eight hours the president is going to come under withering pressure to walk away from reform. It'll come from the left and the right, and in various different flavors. It will come from shocking directions. The president is going to have to find a way to say, No. We're doing this. He'll need to stand down a lot of cowardly and foolish people in his own party. He'll have to stand down the vast and formless force of establishment punditry and just say, No. We're going to do this. And he's going to have to make the case to the public, not necessarily convince all those who have doubts about health care reform but make clear that he thinks this is the right direction for the country and because he thinks it's the right thing to do that he's going to make it happen.

The President needs to say we are not backing down and lead the charge to bring this health care reform proposal to a successful conclusion.

He then needs to tackle in a very major and public way this nation’s unemployment and ongoing recession. This economic mess is not his fault, and the American people understand that, but voters have a right to expect that more be done to correct it and those responsible for the economic collapse be reeled back in under regulation to protect the public.

In short, he needs to do what we elected him to do.
Posted by Sisyphus at 10:27 AM