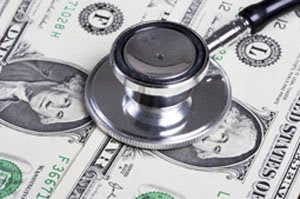 Gershom Gorenberg calls attention to a recent report on the performance of our national healthcare system by the Commonwealth Fund.

The report shows that Americans pay a lot more but receive a lot less for health care compared to other countries. Gorenberg quotes the report as scoring the U.S. an overall 65 out of a possible 100 on 37 core indicators of performance well behind other Western nations. Additionally, access to health care declined from 2006 to 2008.

In what may be the most striking measure, the U.S. had the highest number of deaths that could have been prevented by care - 110 per 100,000. Portugal did better, and so did Greece. In “healthy life expectancy at age 60″ - meaning the number of healthy years you can still expect to live at that age - the U.S. was also close to the bottom. Infant mortality? In the U.S., the rate is 6.8 per 1,000 births, compared to 5.3 in Canada and 3.3 in Finland. The 10 healthiest states in the U.S. came had more infant deaths than Denmark, slightly less than Canada as a whole.
The Commonwealth Fund, alas, didn’t include Israel in its charts. So I emailed my friend Gary Ginsberg, health economist to the world, and asked him for some comparisons. His answers: The infant mortality rate in Israel is 3.9 per 1,000 - better than Denmark, worse than Finland. Sadly, health in Israel shows inequality - the picture is significantly worse for non-Jews. So the infant mortality rate for non-Jews is 6.7 - still better than the U.S. national average.
In Israel in 2002, a man had a healthy life expectancy 16.8 more years, a woman of 18.2 more years. In America, the matching figures were 15.3 years for men, 18.1 for women.
The reason for these differences is pretty obvious: The United States, an underdeveloped country, lacks universal, socialized medical care. The free market flunks at health care. The invisible hand marks up the cost and provides shoddy goods.
Ah, but some well-off Americans might protest: Those pesky figures are for everyone in a country. If you are insured and well-off in America you will live longer and better because of the fabulous hospitals, the incredible techniques.
The incidental evidence is poor on that as well. Check this from the New York Times today: American doctors put in artificial joints that have already proven flawed and that wouldn’t be used in other countries - because the other countries have a national registry that reveals problems quickly, and the U.S. doesn’t. Skip all the arguments about exactly why the U.S. doesn’t. They boil down to: no national health care system. The free market is good at giving you expensive care, not necessarily good care.

You can read Gorenberg’s entire piece here. You can read the report here.
Posted by Sisyphus at 9:40 AM

And when there's a whole class of people without insurance who forgo needed procedures--even simply thinks like having cavities filled or even having their teeth cleaned, because of the expense, this further emphasizes the point.