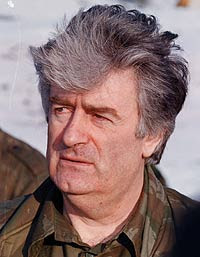 Radovan Karadzic has been arrested on an international warrant for war crimes. He was a fugitive from justice from 1996 until this week. Karadzic was a proponent of Serb nationalism during the breakup of Yugoslavia and under his military leadership of Serb forces in Bosnia during the early 1990’s many atrocities were committed against non-Serb civilians.

Russ Baker’s 2004 article reminds us of the scale of Karadzic’s crimes:

One really shouldn't engage in atrocity one-upmanship, but it's arguable that compared with such more famous current and recent fugitives as Osama bin Laden and Saddam Hussein, Karadzic, wins the odiousness sweepstakes. A remarkably public front man for genocide in the former Yugoslavia, the disarmingly avuncular Bosnian Serb leader dispensed lies to packed press conferences while his soldiers laid siege to Sarajevo (where he previously worked at the main hospital) and went village to village, locking families inside houses and setting them afire, bringing women to detention camps where they could be mass-raped. Along with his general and fellow fugitive Ratko Mladic, Karadzic is accused of responsibility for all manner of atrocity, most notably the 1995 massacre of about 8,000 Muslim men and boys in the U.N. safe area of Srebrenica, the single worst crime committed in Europe since World War II.

Heather Hurlburt notices the trend towards international accountability for crimes against humanity:

For an institution that has been ridiculed, assaulted and accused of non-existence in recent years, international law -- and more important, international accountability for crimes committed against one's own citizens -- is having a pretty darn good run right now.
Today comes the news that, in response to yet another round of European Union pressure, the Serbian government itself arrested indicted war criminal Radovan Karadzic -- a far cry from the days of NATO troops chasing him futilely around the Bosnian countryside seven years ago. Looks as if the Hague is his next stop. (Karadzic, in case you've forgotten, ordered the killings of 7500 Bosnian Muslim men and boys at Srebrenica in 1995, shelled Sarajevo, and used UN peacekeepers as human shields. ….)
And last week we had the International Criminal Court indictment of Sudanese President Omar Bashir for his leadership in the mass killings in Darfur. To be reminded of what he has done, check out the ENOUGH Project's list of his misdeeds here. …
Human Rights Watch's Richard Dicker has a sober, net positive appraisal of the ICC's first five years here. Suspects indicted in four countries but no one brought to trial; a first trial stopped because of problematic evidence rules; financial and law enforcement support from member governments that is not what it should be.
Speaking of member governments, you will notice something interesting about this trend -- from the EU in the Balkans to the states parties to the ICC, progress toward a small-bore, excruciatingly slow but nonetheless forward-moving mechanism of international justice has taken place pretty much without the United States or even, in the case of the ICC, against the will of our government. That business about being the sole superpower and nothing of importance being decided without us? Maybe think again.

We can only hope this trend picks up steam.
Posted by Sisyphus at 9:19 AM