The “martyrdom” of Farfour the mouse 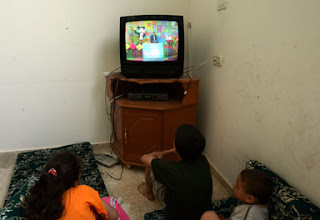 Farfour has been a Mickey Mouse impersonator on the Hamas affiliated television station al-Aqsa TV who urged children to fight Israel and for world wide Islamic domination. The children’s program is shown on Fridays in the Palestinian territories and has been the source of controversy for its promotion of violence and hatred.

Yesterday’s program had the rodent beaten to death by an Israeli trying to take his land. The show’s narrator declared him a martyr killed by killers of children.

This from the Associated Press:

Hamas TV on Friday broadcast what it said was the last episode of a weekly children's show featuring "Farfour," a Mickey Mouse look-alike who had made worldwide headlines for preaching Islamic domination and armed struggle to youngsters.
In the final skit, Farfour was beaten to death by an actor posing as an Israeli official trying to buy Farfour's land. At one point, Farfour called the Israeli a "terrorist."
"Farfour was martyred while defending his land," said Sara, the teen presenter. He was killed "by the killers of children," she added.
The weekly show, featuring a giant black-and-white rodent with a high-pitched voice, had attracted worldwide attention because the character urged Palestinian children to fight Israel. It was broadcast on Hamas-affiliated Al-Aksa TV.
Station officials said Friday that Farfour was taken off the air to make room for new programs.
Station manager Mohammed Bilal said he didn't know yet what would be shown instead.
Israeli officials have denounced the program, "Tomorrow's Pioneers," as incendiary and outrageous. The program was also opposed by the state-run Palestinian Broadcasting Corporation, which is controlled by Fatah.