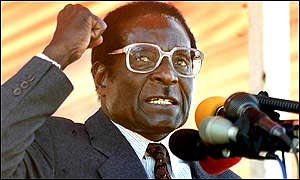 Robert Mugabe has ruled Zimbabwe since 1980. He has ruled as a tyrant and his economic policies, set up to reward political supporters, have been an absolute disaster. The country once known as the “bread basket” of Africa now must import food. The population is starving with over one-third of the population suffering from malnutrition. Life expectancy has dropped from 62 in 1990 to 34 for women and 37 for men – among the lowest in the world. Women dying in childbirth numbered 42,000 last year up from less than 1000 ten years ago. The regime has undertaken efforts to force the urban poor, who have not been supporters of Mugabe, out of their homes and into the countryside to fend for themselves however they can. Aid is blocked to Zimbabweans who do not support Mugabe.

This is really nothing short of mass murder.

James Kirchick has this assessment in this week’s New Republic:

The conditions Mugabe rendered in Zimbabwe do not merely stem from idealistic economic and social policies gone awry. He has undertaken a campaign of violence and starvation against political opponents, the fallout of which is killing tens of thousands, if not more, every year. In 2005, there were roughly 4,000 more deaths each week than births, a rate that the famine has surely increased. This is worse than brutality. The United Nations says that "deliberately inflicting on the group conditions of life calculated to bring about its physical destruction in whole or in part" constitutes genocide, and that is exactly what Robert Mugabe has wrought.

The genocide in Zimbabwe is not as stark as others. There are no cattle cars and gas chambers. There are no machete-wielding gangs roaming the countryside. There are no helicopter gunships or Janjaweed. The killing in Zimbabwe is slow, oftentimes indirect, and not particularly bloody. But Mugabe's campaign of mass murder against those who oppose him has been no less deliberate than any of the other genocides in human history.

It all began with Mugabe's land seizures in 2000, in which he booted white farmers from the property they owned and replaced them with political hacks who have no interest in agriculture. The results were disastrous. Zimbabwe annually requires 1.8 million metric tons of maize. Yet, in 2006, for instance, it faced an 850,000 metric ton deficit -- of which planned imports would cover just 60 percent, with only 28 percent of that delivered by December. The country also requires 400,000 tons of wheat annually, yet, last year, it produced only 218,000 tons by the government's count -- meaning the true total was likely far less. As early as 2002, the BBC was reporting that people in Matabeleland, the southern region of the country where the minority Ndebele tribe lives, were starving. That same year, on the eve of a massive drought, the Minister of Zimbabwean State Security said, "We would be better off with only six million people--with our own who support the liberation struggle. We don't want all these extra people." Today, according to the World Food Program, 38 percent of Zimbabweans are malnourished.

The fallout has rippled through society: Zimbabwe has the world's highest inflation
rate (1,600 percent annually, expected to hit 4,000 by the end of the year) and an HIV prevalence of at least 18 percent, and probably higher. It also has the lowest life expectancy, by far, in the world: 34 for women and 37 for men (it was 62 in 1990). Last year, 42,000 women died from childbirth; less than a decade ago, this figure was under 1,000. The weekly death rate exceeds Darfur's.

Meanwhile, Mugabe's party, ZANU-PF, is wielding the food shortage as a weapon against the opposition. The government's Grain Marketing Board frequently denies food aid to people in districts that voted against Mugabe in recent elections; only those with ZANU-PF membership cards are able to get rations. Several people I spoke with in Harare's poor township of Hatcliffe told me that the army and the police regularly interfere with food distribution from USAID, UNICEF, and other international aid groups. In 2002, USAID director Andrew Natsios publicly scolded Mugabe for manipulating American food aid, a practice that has continued unabated. And a 2004 Amnesty International report warned that "[T]he government has used the food shortages for political purposes and to punish political opponents."

Then, as if starvation weren't bad enough, Mugabe unleashed more destruction in May 2005. Operation Murambatsvina (Shona for "Drive out Filth") aimed to "re-ruralize" some 1 million Zimbabweans--mostly poor, urban shanty dwellers from areas that voted against Mugabe in parliamentary elections just weeks earlier. Mugabe's henchmen forcibly cleared the slums. A United Nations report filed by a special representative of the secretary-general, found that the operation was "carried out in an indiscriminate and unjustified manner, with indifference to human suffering, and, in repeated cases, with disregard to several provisions of national and international legal frameworks." The Fourth Geneva Convention considers the "deportation or forcible transfer of population" to be a crime against humanity.

There is historic and legal precedent to warrant calling these policies genocide. In 1996, U.N Secretary-General Boutros Boutros-Ghali declared that Rwandan Hutu refugees living in Zaire might be potential victims of "genocide by starvation." In December of 2006, the former Ethiopian dictator Mengistu Haile Mariam (also known as the "African Pol Pot") was found guilty of genocide by a court in his own country after a twelve-year trial. His government was convicted of having "conspired to destroy a political group and kill people with impunity"--not only through actual murder, but by creating and prolonging the 1984 Tigray famine, in which some 1.5 million people died. In 1991, Mariam escaped from Ethiopia, finding asylum in, of all places, Mugabe's Zimbabwe.

Incidentally, the starvation and transfer of Mugabe's opponents isn't the first time he has has unleashed a genocidal campaign against his own people. Not long after taking power, in the mid-'80s, Mugabe's North Korean-trained ZANU-PF army killed an estimated 25,000 Ndebeles (the minority tribe to Mugabe's own Shona majority) in an operation known as the Gukurahundi (Shona for "the early rain which washes away the chaff"). The Matabeleland massacre ended, once and for all, any Ndebele challenge to Mugabe's power.

People are finally beginning to call it like they see it in Zimbabwe. R.W. Johnson, an Oxford-trained academic and for many years the London Sunday Times' southern Africa correspondent, declared in a recent dispatch that "A vast human cull is under way in Zimbabwe and the great majority of deaths are a direct result of deliberate government policies. Ignored by the United Nations, it is a genocide perhaps 10 times greater than Darfur's and more than twice as large as Rwanda's." (Johnson reported the widely published number of three million Zimbabwean refugees in South Africa and one million who have fled elsewhere, leaving a population of 14 million in Zimbabwe. But the government itself publishes an official figure of 12 million citizens, leaving 2 million people "missing.") And Arnold Tsunga, chairman of the Crisis in Zimbabwe Coalition (an NGO devoted to democracy and the rule of law in Zimbabwe), called Mugabe's policies "smart genocide," because they have taken place unnoticed by governments, aid organizations, and the international press.

Will anything come of it? This month, South Africa took over the rotating U.N. Security Council presidency. Although it's a perfect opportunity to publicize Mugabe's crimes, South Africa, the regional power, has emboldened Mugabe by endorsing every instance of his election-theft (flying in the face of international observer teams), supplying him with economic aid, and strengthening the countries' military alliance. So it's likely nothing will happen.

You can read Kirkick’s entire article here. You can also read previous posts on Sisyphus about Zimbabwe here, here and here.
Posted by Sisyphus at 9:13 AM

I have a friend from my college days who was from Zimbabwe. He came here originally to get his BA in economics and decided to stay on as things in his home country began to deteriorate (this was the late 80s).

He eventually got his master's degree and picked up a job in Europe. I've not talked to him recently, but last I did he was still trying to go home about once a year or so.

Fortunately, his family has been spared much of the problems the country is enduring, as they live on one of the game preserves (his brother is a park ranger). Nonetheless, the inflation rate is such that it's become impossible for them to buy almost anything.

Mugabe is a monster like Idi Amin and the world has looked the other way. Africa has numerous others and one wonders why they flourish there.

They don't just flourish there! Dictators and tyrants have flourished elsewhere at different times. For example Franko in Spain - he had a reign of terror, need I mention Hitler, also Slobodan Milosevic etc. Unfortunately bad leadership is something that all continents are susceptable to!