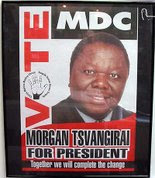 Morgan Tsvangirai, the leader of Zimbabwe’s Movement for Democratic Change (MDC), was released from the hospital earlier today following a brutal beating he received from police on Tuesday. Authorities have been cracking down on dissent against the dictatorship of President Robert Mugabe in the impoverished country.

According to the BBC over 80% of Zimbabweans live in poverty, with chronic unemployment and inflation runs at more than 1,700% - the highest in the world. The resulting death rates from the brutal policies of the Mugabe regime amounts to little more than genocide.

Dissent in the country has been growing and hopefully the end of the regime is within sight. According to opposition lawmaker and MDC activist Nelson Chamisa, "Zimbabweans are ready to fight. They are definitely ready to fight. The regime's days are numbered." (Post)

Mr. Tsvangirai had a piece published in today’s Independent in which he says,

Yes, they brutalised my flesh. But they will never break my spirit. I will soldier on until Zimbabwe is free.
…Democratic change in Zimbabwe is within sight. Far from killing my spirit, the scars they brutally inflicted on me have re-energised me. I seek no martyrdom. I only seek a new dispensation in my country in which citizens live freely in prosperity and not in fear of their rulers.

This is from today’s New York Times:

Zimbabwe's main opposition leader Morgan Tsvangirai left hospital on Friday, saying he was still in pain from an ``orgy'' of police beatings but would keep battling President Robert Mugabe's authoritarian government.
Tsvangirai, head of the Movement for Democratic Change (MDC), had been treated for what his party said was a suspected skull fracture since Tuesday, two days after he and scores of supporters were arrested in an anti-Mugabe protest.
Images of a badly bruised and limping Tsvangirai entering the hospital earlier this week fueled international outrage and threats by the United States and other nations to tighten sanctions against Mugabe and other senior Zimbabwean officials.
A Tsvangirai spokesman said on Friday that the MDC leader would now rest at home.``He is still swollen and in pain, but he feels it's better to recuperate from home ... he is still not himself,'' William Bango said. An MDC spokesman said Tsvangirai was still suffering from dizziness. Doctors have not confirmed a fracture.
***
Tsvangirai and others who were arrested in the crackdown face charges of public violence and convening an illegal rally, defense lawyers say. The charges usually lead to fines not jail.
A court hearing on Tuesday was aborted after a state prosecutor ordered that the MDC leader and other injured detainees be taken to hospital for treatment.
Zimbabwean officials have said the government will brook no dissent on the streets, vowing to use a ``heavy hand'' to enforce a three-month ban on political rallies and protests in Harare.
Mugabe, who frequently blames Zimbabwe's economic problems on sabotage by Britain and the United States, told his Western critics on Thursday that they could ``go hang.''