The devil and Mr. Chavez 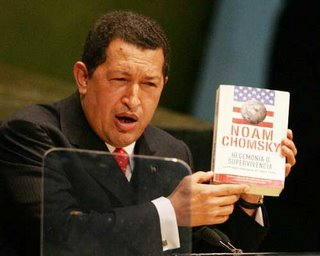 Venezuelan President Hugo Chavez's sophomoric antics this week at the United Nations only confirm that despite his globetrotting he is not a leader of international stature. In case you missed it, he called President Bush "the devil" and pronounced the U.N. "worthless". Venezuela is competing with Guatemala for a seat on the Security Council next year and Chavez seems to be taking the John Bolton approach by attacking the very institution he wants to help lead.

According to the Los Angeles Times, “Standing at the lectern where Bush had delivered his speech the day before, Chavez said, ‘Yesterday, the devil came here. Right here.’ He crossed himself. ‘Right here. And it smells of sulfur still today.’ Many diplomats in the vaulted chamber laughed and clapped.” The remarks about Bush have drawn criticism from Congresswoman Nancy Pelosi and Congressman Charles Rangel.

I have to agree with Marc Cooper when he says, “All I know is that if I were George W. Bush and was worried what the world thought of me, I would quickly choose Chavez as the guy to represent the global opposition.”

Of course, Chavez -- as well as the leaders of any number of trouble spots in the Middle East -- has the power and influence he does because of oil. Imagine if the United States developed alternative sources of fuel and became less dependent on oil rather than filling the treasuries of those hostile to us. On the other hand, national leaders like Chavez and Bush need one another since they both exercise power with fear. As noted before in a quote from Slaves of Academe,

…in practice he and George W. Bush have quite a lot in common, in terms of
methodology. Both have moved aggressively to control the state and harness it to
their personal politics. Both have assumed mythic proportions (in their own
minds, at the very least) as saviours of the nation, have politicised and
compromised civil society, both preside over deeply split electorates, and are
controversial and divisive leaders who relish conflict and the grand
gesture.

Yeah Chavez was gangsta for standing in front of the world and calling Bush "The Devil" and the sulfur line was pretty classic too. Funny stuff. I heard Chavez went to some NY college for a speech and he got a standing ovation...don't know if thats factual or not. But Chavez is the man, just because he knows Sgt. Murtah, Danny Glover.

I'd cosign with anybody who has killed a Predator and was forced to tolerate Mel Gibson. :)