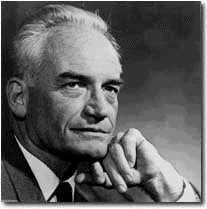 I was 13 at the time of the 1964 Presidential election and my earliest memories of Barry Goldwater. I remember him as rather scary, a view I think shared by most of the nation based upon the vote that year. Over the years I grew to respect his honesty even though I still disagreed with him on many issues. This was in contrast to the successor of his leadership of the Republican Party, Richard Nixon – a man who personified dishonesty and abuse of power. Goldwater called him "the most dishonest individual I have ever met in my life".

Goldwater is credited with the beginning of the takeover of the Republican Party by conservative ideologues. His brand of conservatism had a very libertarian bent to it. (For example, on the issue of gays in the military he once said, “You don’t have to be straight to be in the military. You just have to shoot straight.”) However, there were competing conversatisms more interested in power than principled stands that eventually carried the day.

Goldwater’s granddaughter has done a documentary about his life for HBO. I've not had the opportunity to see it yet. However, Andrew Sullivan has. He discusses the movie and comments on contemporary conservatism:

…Goldwater had no truck for government spending, and raged at the fiscal
excesses of his time. By today's Republican standards, the spending he was
fulminating against was peanuts. Goldwater was an adamant defender of states'
rights, a principle he stuck with even though it meant being smeared as a bigot
and a racist. Bush's GOP has no principled interest in federalism, from its
education policies to its attacks on states that violate religious doctrines on
such issues as marriage, end-of-life matters and even medical marijuana. From
the 1970s, Goldwater recognized Falwell and the religious right for what they
are: charlatans who have as much concern for traditional conservatism as big
government liberals do. What Goldwater would have said about the Schiavo case
would not be broadcastable on network television. He also adhered to the old
conservative notion of live-and-let-live. He never had a problem with gays, and
although he clearly found abortion an awful thing, he wasn't about to remove a
female citizen's right in the early stages of pregnancy to control her own body.
He was, in other words, a conservative. Or as his great book put it: a
conservative with a conscience. And if he was a conservative, then the current
Republican party and the current president simply aren't. More and more
observers recognize this, especially those who do not have a vested or financial
interest in sustaining the charade that this is a conservative administration in
any meaningful sense.

The documentary makes much of Goldwater's stance on the 1964 Civil Rights Act and Johnson's astonishingly courageous move to back it. The irony of Goldwater's career is that this decision, made on a principled stance of federalism and limited government, became something else on the ground. It shifted the Republican Party base away from California and the sun-belt into the Deep South. Goldwater was a Western conservative, not a Southern one. And whichever party the South controls will have a hard time reflecting the kind of skeptical, libertarian, tolerant principles Goldwater believed in. So he both created American conservatism and laid the grounds for its eventual implosion. All these years later, the end-result is a Texan president who hasn't seen a civil liberty he wouldn't junk at a second's notice, who bases campaigns on subtle appeals to prejudice and fear of minorities, who has doubled the debt of the next generation, expanded government at a pace not seen since FDR, engaged in two reckless wars without the preparation or manpower to succeed, presided over a government riddled with incompetence and cronyism, and who has nominated candidates to the Supreme Court using their religious faith as a criterion. Whatever else Bush is, he is not merely not Goldwater. He is, in many ways, his nemesis. Which is why conservatism as we have known it has been strangled - by the Republicans…