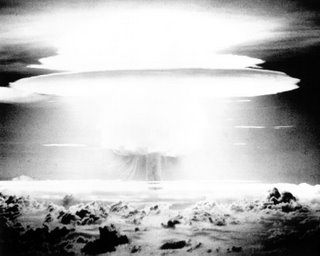 It seems to be the Republican Party’s strategy to never take responsibility for any mistake and when things go wrong to always blame someone else. This is bad enough for those who have actually erred (e.g., Senator George Allen, Representative Dennis Hastert, the entire Bush administration, etc) but now we have Senator John McCain playing this same silly game. Senator McCain, whom many had hoped would retain his statesman status by distancing himself from policies and personnel of the Bush administration, is instead embracing the Bush administration by directing attention away from its failed policies regarding North Korea and trying to blame the Clinton administration for the North Koreans apparent testing of a nuclear device six years since the Clinton administration left town.

Joshua Marshall sums up exactly what happened when:

The 1994 crisis came about because the North Koreans were producing
weapons-grade plutonium. Under the Agreed Framework, they agreed to shutter the plutonium production facility and put the already produced plutonium under
international oversight.

In return, the US promised aide, help building lightwater reactors
(which don't help with bombs) and diplomatic normalization.

That agreement kept the plutonium operation on ice until the end of
2002.

President Bush came to office wanting to pull out of the agreement and
did so when evidence surfaced suggesting that the North Koreans were secretly
trying to enrich uranium (a separate path to the bomb).

To the best of my knowledge, no one thinks the North Koreans are close
to having enough uranium to make a nuclear weapon that way. And it's not even
completely they were ever trying to enrich uranium.

There's certainly an argument to be made that you don't make agreements
with parties you don't trust, like the North Koreans. And perhaps President Bush
would have had some leg to stand on if he'd pulled out of the Agreed Framework
and replaced it with something better -- either force or a better agreement. But
he didn't. He just did nothing for four years. Now we have plutonium, probably
uranium and actual bombs. And according to McCain, it's all Bill Clinton's
fault.