The living nightmare of North Korea 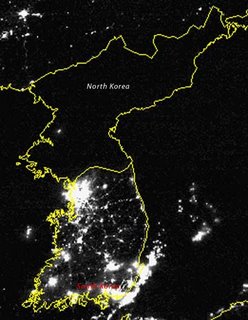 Given the news about North Korea last week it is worth remembering that North Korea society is a living nightmare.

Kim Il-sung ruled from 1948 until his death in 1994. His son, Kim Jong-il, then took over with the transfer of power reminiscent of a monarchy. The cult of personality around the former leader and his son, the present leader, is the driving force in North Korean politics. The power of father and son has been, and remains, absolute.

The economy pretty much collapsed after the country was cut off from the aid supplied by the former Soviet Union for decades. During the 1990’s the county country suffered massive starvation and millions died. The country remains incredibly impoverished.

Christopher Hitchens has this assessment from the Daily Mirror:

NOT even in the lowest moments of the Third Reich, or of the gulag, or of
Mao's "Great Leap Forward" was there a time when all the subjects of the system
were actually enslaved.

In North Korea, every person is property and is
owned by a small and mad family with hereditary power. Every minute of every
day, as far as regimentation can assure the fact, is spent in absolute
subjection and serfdom.
****

A recent night-time photograph of the Korean peninsula from outer space
shows something that no "free-world" propaganda could invent: a blaze of
electric light all over the southern half, stopping exactly at the demilitarised
zone and becoming an area of darkness in the north.

Concealed in that pitch-black night is an imploding state where the
only things that work are the police and the armed forces. The situation is
actually slightly worse than indentured servitude. The slave owner historically
promises, in effect, at least to keep his slaves fed.

In North Korea, this compact has been broken. It is a famine state as
well as a slave state. Partly because of the end of favourable trade relations
with, and subsidies from, the former USSR, but mainly because of the lunacy of
its command economy, North Korea broke down in the 1990s and lost an unguessable number of people to sheer starvation.