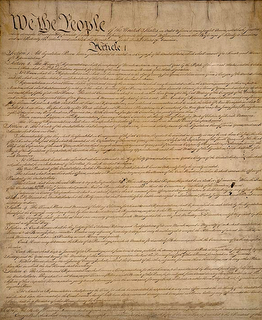 The United States Constitution is undemocratic and deserves rewriting. Power is skewed towards toward the executive branch of our federal government. Our elections are skewed towards voters in tiny states and away from the majority of voters across the country. Justices for the U.S. Supreme Court are appointed for life. Our national governance may appear democratic on the surface but below the veneer is a Byzantine system that works against the popular will.

Sanford Levinson the author of "Our Undemocratic Constitution: Where the Constitution Goes Wrong (and How We the People Can Correct It)," has written a piece in today’s L.A. Times about some of the problems with the Constitution:

THE UNITED STATES Constitution may be the most revered text in the nation. It is our foundational document, which our presidents pledge to preserve and protect and which our judges continue to interpret and reinterpret Talmudically more than 200 years after it was written. It is the symbol of the American democracy that we often insist is the greatest in the world.

Yet in reality, the Constitution is so far from perfect that it threatens our ability to resolve the daunting problems facing our society. It has created a political order that suffers from a "democratic deficit," a term often applied to the European Union but, alas, ever more accurate with regard to our own society.

This is not a mere theoretical failing. At the moment, for instance, more than half the country strongly disapproves of Congress and the president. Almost three-quarters of those polled believe that the United States is headed in the wrong direction. These are not the responses of an electorate that is fundamentally satisfied with the status quo.

One might argue that this is transitory, a matter of momentary antipathy
toward today's incumbents — and that a turnover in next month's elections will
bring renewed joy to the discontented. But that would be a mistake. It is a grim
reality that our Constitution itself ensures that the results will be of far
less significance than one might hope.

Begin with the fact that, whatever happens, George W. Bush will continue to
occupy the White House until Jan. 20, 2009, despite the fact that about 60% of
Americans disapprove of the job he's doing. Most political systems around the
world have mechanisms by which leaders who lose the public's confidence can be
removed. A model in this regard is Britain, where the Tories unceremoniously
dispatched Margaret Thatcher when she was no longer found suitable as their
leader, and where the Labor Party is in the process of doing the same with Tony
Blair. Under our Constitution, although criminals can be removed, mere
incompetents are protected. One need not adopt a parliamentary system in order
to construct a system by which Congress could declare "no confidence" in the
president and force a replacement.

For now, then, Bush retains his powers — including the power to veto
legislation. This is another extraordinarily undemocratic element of the U.S.
system. It allows one man to override the wishes of strong majorities and, in
effect, become an independent third house of an already cumbersome legislative
process. This "three-house" aspect of our legislative process is one explanation
for the difficulty — often, the impossibility — of passing innovative
legislation and having it signed into law.

Californians have a particularly overwhelming reason to disrespect the
Constitution: Although 35 million people live within its borders, it has the
same vote in the U.S. Senate as does Wyoming, which has roughly 500,000 people.

How can you defend a system under which Barbara Boxer was returned to the
Senate in 2004 with about 6.5 million votes at the same time that Alaska's Lisa
Murkowski won the exact same job and power with about 150,000 votes? No greater deviation can be imagined from what we like to believe is a national commitment to "one person/one vote."

Again, this is not merely a theoretical problem. Research has demonstrated
that the control of 25% of the Senate's votes by states with only 5% of the
national population has led to a remarkable flow of federal dollars from highly
populated states such as California and New York to thinly populated but
politically advantaged states. Alaska's infamous "bridge to nowhere" is all too
emblematic of this reality.
****

Nor does California benefit as much as one might believe from its having by
far the largest number of electoral votes in the country. The reasons are
simple: First, small states, guaranteed at least three electoral votes, have
disproportionate voting power in the electoral college. Second, the structure of
the electoral college has created a system whereby presidential candidates focus
only on "battleground states" in which the electorate is closely divided.
****

These are just some of the problems with our Constitution. There's also the
fact that the electoral college has put five men in the White House since World
War II — Harry Truman, John Kennedy, Richard Nixon, Bill Clinton and George W.
Bush — who did not win a majority (and in at least one case, not even a
plurality) of the popular vote. Nor are we well served by the extended period
between election day and the inauguration more than two months later, during
which repudiated lame-duck presidents — think of Jimmy Carter and George H.W.
Bush — retain full authority to make controversial decisions. Or by the fact
that Supreme Court justices often serve for ludicrously long periods — a
quarter-century has become the norm — and the appointment of youngsters such as Clarence Thomas, 42, and Chief Justice John G. Roberts Jr., 50, makes service of 30 or 40 years all too likely. What's more, they are then able to time their
resignations to ensure that their successors are chosen by presidents who share
their political ideology.

To believe that our Constitution is perfect — or even truly adequate to the
world we live in — is equivalent to believing that it is safe to continue
driving a car with bad brakes and dangerously worn tires. Even if we have been
able to make trips safely in the past, we are criminally negligent in believing
that we can continue to do so.

Great food for thought. Thank you so much for your thorough insights. I now know that I will not be so unquestioning of this important document.