Self-defeating actions on the high seas 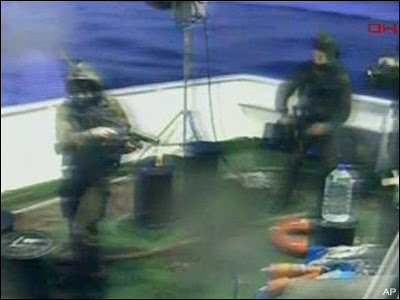 Israel's storming of the Mavi Marmara evokes memories of the British storming of the SS Exodus in 1947. The Exodus was carrying Jewish refugees from Europe to British-ruled Palestine (including present day Israel). The Royal Navy intercepted and boarded the Exodus in international waters to enforce a British ban on immigration into Palestine Mandate. When the passengers and crew resisted, the British used force killing three. The survivors were deported to a detention camp in British occupied Germany. The worldwide condemnation of the heavy-handed British actions was a factor in the eventual withdrawal of the British Empire from the Middle East. The failure to plan and the step-by-step mishandling of the situation led the British to paint themselves in a corner with few options and the defeat of the very policy they were trying to enforce.

Putting the wisdom and morality of the current Israeli (and Egyptian) blockade of Gaza aside for the moment, the boarding of the Turkish Mavi Marmara was an incredibly bungled affair with potentially very serious consequences for Israel. Navies and coastal police board ships all the time to check for smuggling or drug running and enforcement of blockades is one of the things navies do. There are tried and true methods to do this. Given the high stakes involved it would seem a lot of planning would have gone into this operation starting at the highest levels of the government. Instead, the failure to plan has left several dead and wounded and is threatening the very policy the Israelis were trying to enforce.

There was nothing surprising … about the appearance of these boats. They had converged and set sail from Cyprus a day earlier. More to the point, the activists had been planning their voyage—and very publicly announcing their intentions—for weeks.

The Israelis, in short, had plenty of time to issue warnings, explain to the public (including to the Turkish government) what steps might ensue if the activists carried out their plans—and, more important, to plan what the Israeli navy should do if the boats broke through the 28-kilometer "exclusion zone" (which apparently they didn't quite cross before the landing took place in any case).

That the Israeli government did nothing to gain the upper hand in the all-but-certain propaganda battle to come is baffling.

But what's appalling—really mind-twisting—is that the Israelis seem to have had no plan for what to do under such circumstances in general.

Again, a blockade is a military act; this blockade has been in effect, and has had to be enforced several times, for three years. At least once before, in June 2009, Israeli commandos boarded a boat carrying aid for Hamas and towed it to Ashdod without incident. Other nations' navies, as well as multinational task forces, have boarded boats suspected of carrying drugs, nuclear materials, or other contraband for many years. There are time-tested, well-rehearsed methods for doing this without triggering violence—and for quickly suppressing violence, should it break out.

Yet the Israeli navy seems to have had no plan of what to do if commandos boarded a boat and its personnel fought back, whether with fists, bricks, guns, or whatever. Could this be? Or if there were plans, if the commandos have held training exercises under every conceivable scenario, why did everything go wrong here?

More broadly, doesn't the Israeli navy have plans, hasn't it conducted exercises—just as navies worldwide have plans and have conducted exercises—to block these sorts of incursions without storming the boat to begin with? This wasn't an aircraft carrier or a destroyer heading toward Gaza's harbor; there are ways to disable boats of this size without sinking them. There are also ways to block a boat from reaching a coastline without intercepting it in international waters.

When Israeli lawmakers and opinion leaders—not just the typical critics of Israel, but Israelis themselves—call for an investigation of what happened, this is the ultimate question they're getting at: Are Israel's political and military leaders carefully, intelligently, competently defending Israeli security?

The failure onboard the Mavi Marmara was not merely a matter of technical details or tactical mistakes; it was—or at least appears to have been—the result of gross incompetence and strategic malfeasance.

Any Israeli Cabinet minister or military commander of even the slightest intelligence must know that military actions, especially military actions against civilians—even when justified—have political consequences. This doesn't mean actions shouldn't be taken—just that calculating their costs and benefits should, by this time, be second nature.

It is in this context that Ha'aretz columnist Ari Shavit wrote today that, in its actions onboard the Mavi Marmara, "Israel is serving Hamas' interests better than Hamas itself has ever done."

Here is how Hamas' interests have been served so far:

• Under severe pressure, Egypt, which has blockaded Gaza by land for its own political reasons, has opened its borders (at least for now), a move that is likely to facilitate more weapons shipments than the most extreme estimates of potential smuggling from the Mavi Marmara would have supplied.

• Turkey, the only predominantly Muslim country that regards Israel as an ally, has recalled its ambassador from Tel Aviv amid massive anti-Israeli protests in the streets of Istanbul.

• Prime Minister Benjamin Netanyahu, who was on his way to Washington to discuss the resumption of Palestinian peace talks with President Barack Obama, had to go home (for obvious reasons), and the prospect for renewed diplomacy—which had gained much support in the region—has, to say the least, diminished.

• The case for tighter sanctions against Iran, to the extent that they involve sympathy with Israel's security concerns, has been dealt a setback, just as the U.N. nuclear agency has announced that Iran has enough fuel to build two A-bombs (though the fuel still needs to be enriched).

• The U.N. Security Council has condemned Israel's actions, and countless aid groups, including no doubt several that are hostile to Israel, are sailing toward Gaza, as if to dare the Israelis to fire on them too and, in any case, to deal another blow against the legitimacy of the blockade.

In sum, in order to keep one ship from delivering aid directly to Hamas—and, as Ha'aretz put it, choosing "the worst of all possible options" to do so—Israel has plunged itself into the deepest state of isolation that it's experienced in years.

One way to begin extracting itself from this morass might be to reconsider the Gaza blockade. The logic of the policy is unassailable: The ruling party, Hamas, doesn't recognize Israel's right to exist and occasionally hurls mortar shells at Israeli territory. Israel is reasonable to make sure that goods coming in to Gaza don't include weapons.

However, the execution of the policy has been unreasonably draconian. Israeli officials take so long to inspect the cargo that medicines often expire by the time they reach Palestinian patients. Construction materials, such as pipes and heavy metals, are confiscated on the grounds that they could be used to make weapons, and so the Gaza authorities are unable to rebuild destroyed neighborhoods.

According to some estimates, the flow of goods coming into Gaza—not just food and medical supplies but goods of all sorts—amounts to a mere one-quarter of pre-blockade levels.

The situation has not only spawned a humanitarian crisis, it has also played into the hands of militants who seek to exploit the genuine concern of international aid groups for their own advantage—and to further portray Israeli policy as savage while evading their own responsibility for the continued hostilities.

This situation has become symbolic of Israel’s recent hard-line governments to react in often self-defeating ways rather than think through the consequences of their actions. The Netanyahu government should be held accountable for advancing the cause of Hamas through its bungling.
Posted by Sisyphus at 1:14 PM