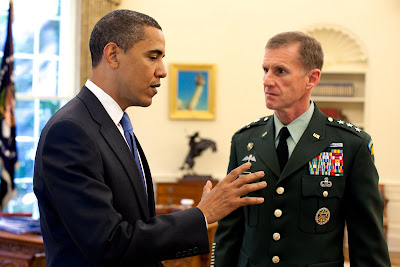 By the time you read this the decision about the future of General Stanley A. McChrystal’s command of U.S. forces in Afghanistan may have been made. The General is to be meeting with President Obama later this morning following quotes attributed to him and his staff mocking the White House and civilian decision makers on the Afghan conflict. McChrystal will reportedly offer this resignation and there is speculation he will be relieved of duty for insubordination.

However, Peter Beinart argues that the problem with McChrystal goes beyond intemperate remarks he and his aides made about the civilian leadership of the United States. Rather he argues the problem is with the General pursuing a policy of trying to win the war in Afghanistan at any cost contrary to the stated foreign policy of the United States of limiting the conflict and not allowing it drain U.S. resources and distract it from other important tasks at home and abroad. He writes in the Daily Beast:

For close to a year now, it’s been painfully clear that McChrystal, with the backing of David Petraeus and the rest of the top military brass, wants America to make an unlimited commitment to the Afghan war. Counterinsurgency, they believe, works; all it requires is an unlimited amount of money and time. As Jonathan Alter details in his book, The Promise, McChrystal and company spent last summer waging a media and bureaucratic campaign aimed at forcing Obama to make that unlimited commitment. Obama resisted, insisting on a timeline for beginning America’s withdrawal. But the fight goes on. In his book, Alter quotes Biden as pledging that “In July of 2011, you’re going to see a whole lot of people moving out. Bet on it.” Confronted with that quote last weekend, Robert Gates shot Biden down, declaring that “that absolutely has not been decided.”

Obama’s problem isn’t that McChrystal is talking smack about him. His problem is that McChrystal isn’t pursuing his foreign policy. McChrystal wants to “win” the war in Afghanistan (whatever that means) no matter what it takes. Obama believes that doing whatever it takes will cost the U.S. so much money, and so distract the administration from other concerns, that it will cripple his efforts to stabilize America’s finances and rebuild American economic power. That’s the struggle that Hastings exposes: between a single-minded general who will stop at nothing to fulfill his mission and a president who believes that even if that mission saves Afghanistan, it could bankrupt the United States. It’s a struggle about whether America is going to adjust to the new limits on its power or pretend that they don’t exist.

That’s the real relevance of the Harry Truman-Douglas MacArthur analogy. Truman didn’t just fire MacArthur because the general treated him with disrespect. He fired him because MacArthur wanted to do whatever it took to liberate the Korean peninsula, including bombing mainland China, whereas Truman came to realize that Korea must be a limited war, fought merely to preserve South Korean independence. In insisting that America’s Cold War strategy be the containment of communism, not the rollback of communism, Truman kept the pursuit of military victory from destroying American power.

Now Obama must do the same. Last summer, he tried to split the difference—surging in Afghanistan while simultaneously pledging to retreat on the theory that within eighteen months the U.S. could so weaken the Taliban that they would sue for peace. Six months in, that strategy looks increasingly absurd. As its most honest proponents concede, counterinsurgency is a long, messy business, especially when the president whose country you’re trying to save is indifferent, if not hostile, to the effort. In all likelihood, when the deadline for troop withdrawal arrives a year from now, Obama will be forced to choose between something that looks like an unlimited commitment and something that looks like defeat. He’ll be forced to make the choice that he avoided last year.

Obama should make it now. He should use McChrystal’s transgression to install a general who will publicly and unambiguously declare that America’s days in Afghanistan are numbered. He should use this moment not just to show that he won’t tolerate insubordination, but to take control of his foreign policy, as Truman did in 1951. Calling McChrystal on the carpet isn’t the point; the point is ending a war that could wreck Obama’s presidency. That would be the best revenge.

The third clause of the first sentence- "with the backing of David Petraeus"- invalidates his entire thesis. If the problem were "...that McChrystal isn’t pursuing his foreign policy.", President Obama wouldn't have appointed his backer, Gen. Petraeus, as his successor.