Starve the beast, feed the deficit 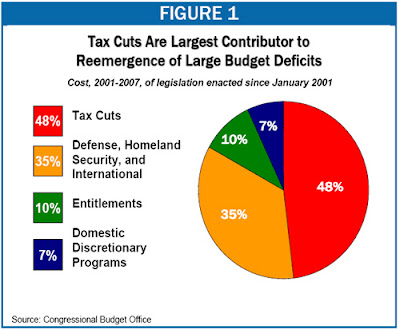 Paul Krugman looks at comparisons between the debt problems in Greece and in the United States. (This is a follow-up to his blog post on the same subject yesterday.) While both nations are running large budget deficits the future prospects for each differ significantly. The American economy is finally growing due to fiscal stimulus and expansionary policies by the Federal Reserve. That growth, in turn, will boost revenues. Relatively low interest rates on U.S. bonds give the Americans time to deal with their deficit. Greece, on the other hand, faces zero economic growth and interest rates on bond twice that of American bonds. Importantly also is the fact Greek currency is now the Euro and they cannot devalue it as they could with their own currency.

While we in much better shape that Greece we could have been still yet in far better shape. So why aren’t we? Krugman explains:

In short, we’re not Greece. We may currently be running deficits of comparable size, but our economic position — and, as a result, our fiscal outlook — is vastly better.

That said, we do have a long-run budget problem. But what’s the root of that problem? “We demand more than we’re willing to pay for,” is the usual line. Yet that line is deeply misleading.

First of all, who is this “we” of whom people speak? Bear in mind that the drive to cut taxes largely benefited a small minority of Americans: 39 percent of the benefits of making the Bush tax cuts permanent would go to the richest 1 percent of the population.

And bear in mind, also, that taxes have lagged behind spending partly thanks to a deliberate political strategy, that of “starve the beast”: conservatives have deliberately deprived the government of revenue in an attempt to force the spending cuts they now insist are necessary.

Meanwhile, when you look under the hood of those troubling long-run budget projections, you discover that they’re not driven by some generalized problem of overspending. Instead, they largely reflect just one thing: the assumption that health care costs will rise in the future as they have in the past. This tells us that the key to our fiscal future is improving the efficiency of our health care system — which is, you may recall, something the Obama administration has been trying to do, even as many of the same people now warning about the evils of deficits cried “Death panels!”

So here’s the reality: America’s fiscal outlook over the next few years isn’t bad. We do have a serious long-run budget problem, which will have to be resolved with a combination of health care reform and other measures, probably including a moderate rise in taxes. But we should ignore those who pretend to be concerned with fiscal responsibility, but whose real goal is to dismantle the welfare state — and are trying to use crises elsewhere to frighten us into giving them what they want.

For those concerned that Americans are being taxed to death the taxes Americans paid in 2009 were the lowest since the Truman administration in 1950 according to this story in USA Today.
Posted by Sisyphus at 10:32 AM

I would agree, although our economic outlook could get much worth, at this point we have an opportunity to prevent a disaster by resolving health care and taxes.