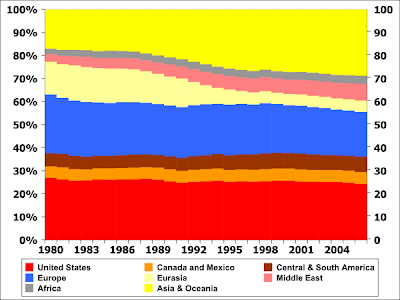 What we do know: 1. The current and unfolding disaster in the Gulf of Mexico from oil spewing out of an underwater well will prove to be one of the worse environmental catastrophes to impact this nation and our neighbors to the south. 2. And this is yet again one more symptom, or result, of this nation’s addiction to cheap petroleum.

The United States surpassed self-sufficiency in oil production over forty years ago and now consumes approximately 25% of the oil produced from around the world. The real costs of oil are largely hidden from American businesses and consumers. Taxes are kept low and do not reflect the costs taxpayers pay for elsewhere for military defending the nonstop flow of oil from the Middle East, the regulatory infrastructure set up to protect consumers, and the costs of cleaning up the messes left behind from oil production and consumption whether, for example, air pollution or oil spills like the one we are witnessing in Gulf.

A quick fix to the Gulf oil spill would be to restrict these types of rigs and drilling in and around the shores of the United States. The problem is that doesn’t address the consumption end of the production/consumption equation. It only pushes the dangers of production to someone else’s backyard. Lisa Margonelli explains in the New York Times:

… Whether this spill turns out to be the result of a freakish accident or a cascade of negligence, the likely political outcome will be a moratorium on offshore drilling. Emotionally, I love this idea. Who wants an oil drill in his park or on his coastline? Who doesn’t want to punish Big Oil on behalf of the birds?

Moratoriums have a moral problem, though. All oil comes from someone’s backyard, and when we don’t reduce the amount of oil we consume, and refuse to drill at home, we end up getting people to drill for us in Kazakhstan, Angola and Nigeria — places without America’s strong environmental safeguards or the resources to enforce them.

Kazakhstan, for one, had no comprehensive environmental laws until 2007, and Nigeria has suffered spills equivalent to that of the Exxon Valdez every year since 1969. (As of last year, Nigeria had 2,000 active spills.) Since the Santa Barbara spill of 1969, and the more than 40 Earth Days that have followed, Americans have increased by two-thirds the amount of petroleum we consume in our cars, while nearly quadrupling the quantity we import. Effectively, we’ve been importing oil and exporting spills to villages and waterways all over the world.

The Deepwater Horizon spill illustrates that every gallon of gas is a gallon of risks — risks of spills in production and transport, of worker deaths, of asthma-inducing air pollution and of climate change, to name a few. We should print these risks on every gasoline receipt, just as we label smoking’s risks on cigarette packs. And we should throw our newfound political will behind a sweeping commitment to use less gas — build cars that use less oil (or none at all) and figure out better ways to transport Americans.

Simply pushing oil production away from us does not solve the underlying problem. …

The problem isn’t our dependence on foreign oil; the underlying problem is our dependence on oil. (I would argue there is no such thing as domestic oil – it all is on the world market.) As our population grows and as we become more dependent on technology in various forms – all of which requires some form of energy to function – then we need to seriously explore energy-efficient technologies and alternative forms of energy.