The risks to U.S. interests should Israel attack Iran


Iran’s nuclear program was launched in the 1950’s as part of the Atoms for Peace program promoted by the United States. Western governments supported Iran’s nu 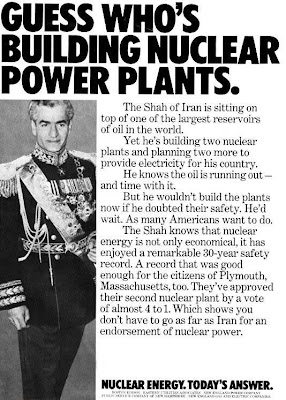 clear program until the 1979 Islamic Revolution that toppled the Shah. Following the revolution, the Iranian government disbanded the nuclear program but revived it later.

Enrichment can be used to produce uranium for reactor fuel or (at higher enrichment levels) for weapons. Controversy over Iran's nuclear programs centers its failure to declare sensitive enrichment and reprocessing activities to the IAEA (International Atomic Energy Agency) coinciding with belligerent rhetoric by the Iranian leadership towards Israel. Israel, unlike Iran, is not a signatory to the Nuclear Non-Proliferation Treaty (NPT) and therefore not obligated to allow inspections by or report nuclear activities to the IAEA. Israel, surrounded by states that have expressed varying degrees of hostility towards it, has made it a policy not to allow any nearby country to develop a nuclear weapons program that might surpass the capability of Israel to defend itself. The Israeli air force bombed nuclear weapons sites in Iraq in 1981 and Syria in 2007.

The likelihood of an Israeli attack on Iran has become a talking point with U.S. diplomats attempting to persuade Chinese support for pressuring Iran to give up its nuclear weapons program. The United States has a lot at stake in trying to resolve this conflict peacefully. Steven Simon at the Council for Foreign Relations (via Andrew Sullivan) assesses the risks to U.S. interests if Israel launches an attack on Iran:

Some observers would view an Israeli attack that significantly degraded Iran’s nuclear weapons capability as beneficial to U.S. counterproliferation objectives and ultimately to U.S. national security. The United States has a clear interest in the integrity of the NPT regime and the compliance of member states with meaningful inspection arrangements. The use of force against Iran’s nuclear program would, at a minimum, show that attempts to exploit the restraint of interested powers, manipulate the diplomatic process, game the NPT, and impede International Atomic Energy Agency (IAEA) access to nuclear-related facilities could carry serious penalties. Were Iran to acquire a nuclear weapons capability, the ability of the U.S. military forces to operate freely in the vicinity of Iran could, under some circumstances, be constrained. Looking into the future, a hostile Iran could also develop reliable long-range delivery systems for nuclear warheads that could strike American territory.

At the same time, an Israeli attack—even if operationally successful—would pose immediate risks to U.S. interests.

First, regardless of perceptions of U.S. complicity in the attack, the United States would probably become embroiled militarily in any Iranian retaliation against Israel or other countries in the region. Given uncertainties about the future of Iraq and a deepening commitment to Afghanistan, hostilities with Iran would stretch U.S. military capabilities at a particularly difficult time while potentially derailing domestic priorities.

Second, an Israeli strike would cause oil prices to spike and heighten concerns that energy supplies through the Persian Gulf may become disrupted. Should Iran attempt to block the Strait of Hormuz by mining, cruise missile strikes, or small boat attacks, these fears would become realized. According to the GAO, however, the loss of Iranian oil for eighteen months would increase prices by only $6 to $11/bbl, assuming that the International Energy Agency coordinated release of reserves. This said, at the onset of the crisis, prices might hit $200/bbl (up from the current level of around $77/bbl) for a short period but would likely quickly subside.

Third, since the United States would be viewed as having assisted Israel, U.S. efforts to foster better relations with the Muslim world would almost certainly suffer. The United States has an enduring strategic interest in fostering better relations with the Muslim world, which is distinct from the ruling elites on whom the United States depends for an array of regional objectives. In part, this interest derives from the need to lubricate cooperation between the United States and these governments by lowering some of the popular resentment of Washington that can hem in local leaders and impede their support for U.S. initiatives. A narrative less infused by anti-Americanism also facilitates counterterrorism goals and, from a longer-range perspective, hedges against regime change. The perceived involvement of the United States in an Israeli attack would undercut these interlocking interests, at least for a while.

Fourth, the United States has a strong interest in domestically generated regime change in Iran. Although some argue that the popular anger aroused in Iran by a strike would be turned against a discredited clerical regime that seemed to invite foreign attack after its bloody postelection repression of nonviolent opposition, it is more likely that Iranians of all stripes would rally around the flag. If so, the opposition Green movement would be undermined, while the ascendant hard-line clerics and Revolutionary Guard supporters would face fewer constraints in consolidating their hold on power.

Fifth, an Israeli attack might guarantee an overtly nuclear weapons capable Iran in the medium term.

Sixth, although progress toward an Israeli-Palestinian final status accord remains elusive, an Israeli strike, especially one that overflew Jordan or Saudi Arabia, would delay fruitful renewed negotiation indefinitely. Both Washington and Jerusalem would be too preoccupied with managing the consequences of an attack, while regional capitals would deflect U.S. appeals to upgrade relations with Israel as an incentive to concessions. If Hamas or Hezbollah were to retaliate against Israel, either spontaneously or in response to Iranian pressure to act, any revival of the peace process would be further set back.

Finally, the United States has an abiding interest in the safety and security of Israel. Depending on the circumstances surrounding an Israeli attack, the political-military relationship between Jerusalem and Washington could fray, which could erode unity among Democrats and embolden Republicans, thereby complicating the administration’s political situation, and weaken Israel’s deterrent. Even if an Israeli move on Iran did not dislocate the bilateral relationship, it could instead produce diplomatic rifts between the United States and its European and regional allies, reminiscent of tensions over the Iraq war.

Which is the greater threat – GLOBAL WARMING or an ISRAELI ATTACK on Iran?

An illegal attack by Israel upon Iran, using US supplied fighter aircraft and high explosive munitions, is a global threat that will affect not only the Middle East but Europe. There is, however, a contention that AIPAC supporters are under the mistaken impression that in America they will be safe from any fallout. That opinion is erroneous.

Such an attack, unauthorized by any international authority, will likely signal the start of a nuclear war, initially in the ME that will soon spread to endanger not only Europeans but Americans. In comparison, the debate on global warming becomes immaterial.

Stephen Retherford stated: "The likelihood of an Israeli attack on Iran has become a talking point with U.S. diplomats attempting to persuade Chinese support for pressuring Iran to give up its nuclear weapons program. The United States has a lot at stake in trying to resolve this conflict peacefully."

You are assuming that Iran has a nuclear weapons program! Please provide the facts, not conjecture.

The US-CIA and other intelligent agencies have stated that since 2003 Iran has not had an active nuclear weapon program. IAEA has indicated that Iran has not diverted low enriched nuclear reactor fuel (5% U-235). Iran does not have enrichment system for increasing uranium concentration to higher than 90% U-235 required for weapon program.

If we want peace in the Middle East, we must keep a leach on Israel. Israel has nuclear bombs.

Correction:
If we want peace in the Middle East, we must keep a leash on Israel. Israel has nuclear bombs.