Ft. Hood and the “clash of civilizations” 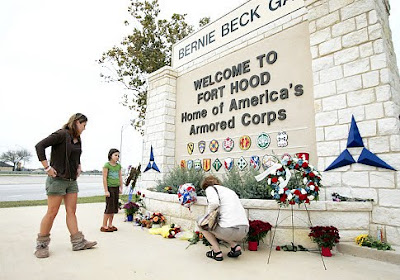 There is not much we know yet about the man who committed the crimes at Ft. Hood other than he was an officer and a Muslim and about to be deployed to Afghanistan. We know nothing about his motivations to commit violence whether he was mentally deranged or under the influence of some extremist ideology. There seems to be no evidence to date that he was part of a larger conspiracy.

However, the absence of evidence of a conspiracy or little information on what was driving this man to act as he did has not preventing some in the press and on the internet from seeing Muslim Americans as untrustworthy aliens within the midst of a Christian majority country. Some have even called for a ban on Muslim Americans from the military. The underlying assumptions of this circling-the-wagons mentality with one set of Americans on the inside and another set of Americans on the outside is as unfair as it is ridiculous. And, in a larger political-global context, it is self-defeating. Marc Lynch explains:

Since the Ft Hood atrocity, I've seen a meme going around that it somehow exposed a contradiction between "political correctness" and "security." The avoidance of Nidal Hassan's religion out of fear of offending anyone, goes the argument, created the conditions which allowed him to go undetected and unsanctioned in the months and years leading up to his rampage. American security, therefore, demands dropping the "political correctness" of avoiding a confrontation with Islamist ideas and asking the "tough questions" about Islam as a religion and the loyalty of Muslim-Americans.

This framing of the issue is almost 100% wrong. There is a connection between what these critics are calling "political correctness" and national security, but it runs in the opposite direction. The real linkage is that there is a strong security imperative to prevent the consolidation of a narrative in which America is engaged in a clash of civilizations with Islam, and instead to nurture a narrative in which al-Qaeda and its affiliates represent a marginal fringe to be jointly combatted. Fortunately, American leaders -- from the Obama administration through General George Casey and top counter-terrorism officials -- understand this and have been acting appropriately.

It's worth walking through the connection once again, because how America responds to Ft. Hood really is important in the wider attempt to change the nature of its engagement with Muslim publics across the world. Get the response right, as the administration thus far has done, and they show that things really have changed. Get it wrong, as its critics demand, and the world could tumble back down into the 'clash of civilizations' trap which al-Qaeda so dearly wants and which the improved American approach of the last couple of years has increasingly denied it.

The grand strategy of al-Qaeda and its affiliated ideologues is, and has always been, to generate a clash of civilizations between Islam and the West which does not currently exist. Their great challenge is that the vast majority of Muslims reject their theology, ideology, strategy and tactics. That's especially true of American Muslims. They therefore feel the need to change the environment in which Muslims live in order to change their calculations about the appropriateness of extremist identities and ideologies and actions.

Terrorism is a means towards that end. The object is to create a violent, polarized environment in which Muslims are forced to embrace a narrow, extreme version of Muslim identity. They want Muslims to accept a master narrative in which the Islamic umma is existentially threatened by Western aggression, and the only theologically and strategically appropriate individual response is to join the jihad in the path of god (as they have defined it).

They recognize that most Muslims won't embrace this radical conception of their identity just through messaging, internet rhetoric, or preaching. To make inroads with mainstream Muslim communities, they need to change the context in which they live -- to render their status quo unacceptable and to make their narrative resonate. And for that to happen, they need a lot of help -- for the targeted governments to take inflammatory measures against their Muslim populations, for the non-Muslim citizens in the targeted countries to discriminate against them, and for the media to fan the flames of hatred and mistrust.

Understanding this strategy points towards some fairly obvious guidelines for judging various responses. Al-Qaeda and its affiliated ideologues don't just want their targets to overreact with blanket crackdowns on the mainstream Muslim community -- they are counting on it. They want to create a homogenous, undifferentiated Islam on whose behalf they speak and a coherent master narrative which justifies and validates their actions. American reactions which feed AQ's master narrative, lump together disparate Muslim movements, and tar a wide range of Muslims with the AQ brush therefore serve al-Qaeda's strategy. Responses which disrupt AQ's narrative, disaggregate the Muslim world and relegate AQ to a marginal fringe frustrate its strategy.

A lot of people -- some well-meaning, some clowns or worse -- evidently want the American response to the Ft. Hood shootings to revive the post-9/11 "war of ideas" and "clash of civilizations" anti-Islamic discourse. It's a jihad, they shout, demanding careful scrutiny of the loyalty of American Muslims. That's what they seem to mean by the demand to throw away "political correctness" and confront the ideological menace. The overall effect of their recommendations, however, would be to revive the flagging al-Qaeda brand and to greatly strengthen the appeal of its narrative. And that's exactly what we should not want.

I don't think it's going to happen. President Obama and his national security team clearly rejects such strategic misconceptions. They understand the importance of combining effective police work and international cooperation with a carefully calibrated rhetoric and strategic communications campaign. Americans have learned a lot since 9/11. And if the careful police work and investigation uncovers real ties to al-Qaeda, then I expect they will pursue those leads and carry out the appropriate response quietly and efficiently --- but without inflaming public hostilities, scoring cheap political points, or fueling the al-Qaeda narrative.