The greatest health care system in the world? 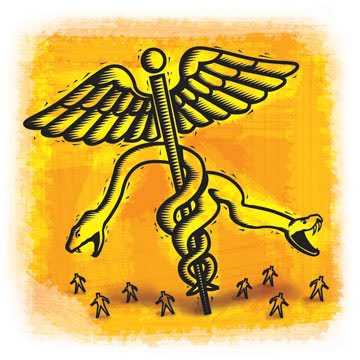 Whenever there is a debate about any major change in the laws or services of society there is a perfectly legitimate concern about whether or not the change is really needed. It’s the old “if it ain’t broke, don’t fix it” line of thinking that comes into play. It is a reasonable concern to raise but sometimes some people will go out of their way to overlook the obvious in defending the status quo.

The moment of truth for health care is at hand, and the distortion that perhaps gets the most traction is this:

We have the greatest health care system in the world. Sure, it has flaws, but it saves lives in ways that other countries can only dream of. Abroad, people sit on waiting lists for months, so why should we squander billions of dollars to mess with a system that is the envy of the world? As Senator Richard Shelby of Alabama puts it, President Obama’s plans amount to “the first step in destroying the best health care system the world has ever known.”

That self-aggrandizing delusion may be the single greatest myth in the health care debate. In fact, America’s health care system is worse than Slov—er, oops, more on that later.

The United States ranks 31st in life expectancy (tied with Kuwait and Chile), according to the latest World Health Organization figures. We rank 37th in infant mortality (partly because of many premature births) and 34th in maternal mortality. A child in the United States is two-and-a-half times as likely to die by age 5 as in Singapore or Sweden, and an American woman is 11 times as likely to die in childbirth as a woman in Ireland.

Canadians live longer than Americans do after kidney transplants and after dialysis, and that may be typical of cross-border differences. One review examined 10 studies of how the American and Canadian systems dealt with various medical issues. The United States did better in two, Canada did better in five and in three they were similar or it was difficult to determine.

Yet another study, cited in a recent report by the Robert Wood Johnson Foundation and the Urban Institute, looked at how well 19 developed countries succeeded in avoiding “preventable deaths,” such as those where a disease could be cured or forestalled. What Senator Shelby called “the best health care system” ranked in last place.

The figures are even worse for members of minority groups. An African-American in New Orleans has a shorter life expectancy than the average person in Vietnam or Honduras.

I regularly receive heartbreaking e-mails from readers simultaneously combating the predations of disease and insurers. One correspondent, Linda, told me how she had been diagnosed earlier this year with abdominal and bladder cancer — leading to battles with her insurance company.

“I will never forget standing outside the chemo treatment room knowing that the medication needed to save my life was only a few feet away, but that because I had private insurance it wasn’t available to me,” Linda wrote. “I read a comment from someone saying that they didn’t want a faceless government bureaucrat deciding if they would or would not get treatment. Well, a faceless bureaucrat from my private insurance made the decision that I wouldn’t get treatment and that I wasn’t worth saving.”

It’s true that Americans have shorter waits to see medical specialists than in most countries, although waits in Germany are shorter than in the United States. But citizens of other countries get longer hospital stays and more medication than Americans do because our insurance companies evict people from hospitals as soon as they can stagger out of bed.

For example, in the United States, 90 percent of hernia surgery is performed on an outpatient basis. In Britain, only 40 percent is, according to a report by the McKinsey Global Institute.

Likewise, Americans take 10 percent fewer drugs than citizens in other countries — but pay 118 percent more per pill that they do take, McKinsey said.

Opponents of reform assert that the wretched statistics in the United States are simply a consequence of unhealthy lifestyles and a diverse population with pockets of poverty. It’s true that America suffers more from obesity than other countries. But McKinsey found that over all, the disease burden in Europe is higher than in the United States, probably because Americans smoke less and because the American population is younger.

Moreover, there is one American health statistic that is strikingly above average: life expectancy for Americans who have already reached the age of 65. At that point, they can expect to live longer than the average in industrialized countries. That’s because Americans above age 65 actually have universal health care coverage: Medicare. Suddenly, a diverse population with pockets of poverty is no longer such a drawback.

That brings me to an apology.

In several columns, I’ve noted indignantly that we have worse health statistics than Slovenia. For example, I noted that an American child is twice as likely to die in its first year as a Slovenian child. The tone — worse than Slovenia! — gravely offended Slovenians. They resent having their fine universal health coverage compared with the notoriously dysfunctional American system.

As far as I can tell, every Slovenian has written to me. Twice. So, to all you Slovenians, I apologize profusely for the invidious comparison of our health systems. Yet I still don’t see anything wrong with us Americans aspiring for health care every bit as good as yours.