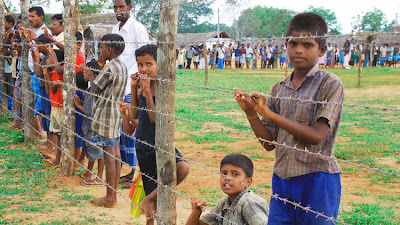 Reports out of Sri Lanka say two Tamils were wounded when the military fired on dozens of Tamils attempting to escape state-run camps for refugees from the 25-year civil war between the Sri Lankan government and the Tamil minority in the north. The war concluded last May with a military victory by the government but only after the displacement of hundreds of thousands of civilians who were mostly Tamil. The government set up camps for the refugees. The government referred to them as welfare camps although others see them as concentration camps. The government has promised to resettle the refugees but has been moving very slowly. In the meantime, the government has restricted access to the camps but reports leaking out are that conditions in the camps are pretty bad and not improving.

This from Bart Beeson and Annalise Romoser at World Politics Review:

Everywhere in the Sri Lankan capital of Colombo, posters featuring smiling soldiers holding rocket launchers and machine guns celebrate the recent end to the nation's 26-year civil war. But in the government-run camps that still house more than 250,000 ethnic Tamils displaced by the war's fighting, the mood is far from celebratory.

In late August, heavy rains at the largest camp, Manik, flooded tents and led to unsanitary conditions. According to aid worker K Thampu, "The situation was heartbreaking. Tents were flooded and mothers, desperate to keep their children dry during the night, took chairs and tables from school facilities for them to sleep on."

Rains also caused toilets to flood, with worms covering large swaths of ground near latrines, says Thampu. At stake, according to local experts, is not only the immediate welfare of camp residents, but chances for long-lasting peace in Sri Lanka.

Most of the internally displaced people (IDPs) have been living in the camps since May, when they fled the intense fighting that marked the final battle between government forces and the insurgent group known as the Tamil Tigers. Publicly, the Sri Lankan government has committed to returning IDPs to their homes by November of this year, and several thousand people have been released from camps to live with relatives. But the government under President Mahinda Rajapaksa also maintains that others must remain in camps until the area around their former homes is cleared of mines. At the same time, government representatives are slowly screening camp residents to identify former combatants.

Aid workers and local experts agree that the government must move quickly, for several reasons. The most urgent among them is monsoon season, which starts at the end of September and will only exacerbate the already difficult camp conditions. More tents and toilets will flood, increasing the risk of communicable and mosquito-born diseases.

"We saw how bad things got after the recent rains, which only lasted 3 or 4 days," says Thampu, who works for the Baltimore-based humanitarian organization Lutheran World Relief. "Imagine how bad they will get once the monsoons are upon us."

In addition to the rains, long-standing tensions between Tamils and the Sinhalese-led government remain, even if the armed insurgency has been defeated. Many worry that if the government does not act quickly to return people to their homes, it will lead to new problems in northern Sri Lanka.

Thampu says that many teenagers in the camps are already frustrated. "Young people have told me, 'We have no freedom to talk, no protection, no education, no recreation and no employment! Everything looks like hell in our life. What do we have to live for?'"

****
Bernard Jaspers Failer, of the aid organization ZOA Refugee Care, acknowledges that the Sri Lankan government has genuine security concerns. "But," he is quick to add, "those have to be balanced with the fact that the longer people remain in camps, new frustrations are being generated which will have long-term impacts on society."

The Sri Lankan government has strictly regulated access to the camps. But those organizations and governmental representatives who have been able to visit have expressed concern over the conditions. Human Rights Watch, the New York-based rights organization, has said that the government "is threatening [IDPs'] health and even their lives by keeping them there during the rainy season floods."

U.S. officials have also put pressure on the Sri Lankan government to allow camp residents to return home. In comments made on Aug. 19, Eric Schwartz, assistant secretary for the Bureau of Population, Refugees, and Migration at the State Department, said the "involuntary confinement is especially a source of concern given the recent rains and given the coming of the monsoon season, and it makes it all the more important that release from confinement be an issue that friends of Sri Lanka continue to raise."

In an effort to expedite the process, on July 27, the U.S. announced an additional $8 million in aid to assist in the return of IDPs to their homes in northern Sri Lanka.

With the monsoon season rapidly approaching, and frustration levels on the rise within the camps, local experts agree that time is a critical factor. For Thampu, it is "a situation where a successful return process would be a giant step towards long-lasting peace. But if these people who were forced from their homes are forced to stay in camps, it could result in increased tensions for the down the road."