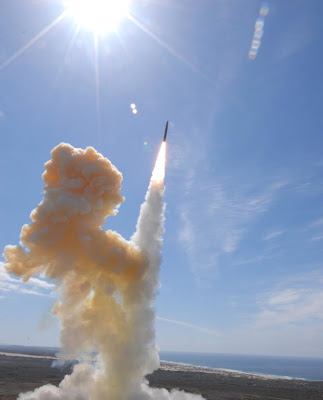 Fred Kaplan has a very good article on President Obama’s decision to scuttle the Bush administration’s proposed missile-defense system to be built in Poland and the Czech Republic:

The decision, which he announced this morning after completing a six-month review of the program, removes the biggest obstacle in U.S.-Russian relations—a step that could clear the way for cooperative measures on a wide range of international issues—without scrapping the general idea of some sort of "missile shield" for Europe.

Bush came up with the plan to put 10 anti-missile interceptors and radars on Czech and Polish soil in 2007, and the Russians have been clamoring about it ever since. Prime Minister Vladimir Putin accused Bush of trying to upset the balance of power.

Bush's top officials, including his (and now Obama's) defense secretary, Robert Gates, tried to persuade Putin that such fears had no basis. The interceptors would be configured to shoot down missiles launched by Iran, not by Russia. And in any case, a mere 10 interceptors were hardly a counterweight to the thousands of offensive missiles in Russia's nuclear arsenal.

The argument was correct but also beside the point. The Russians were worried not so much about what 10 interceptors could do but rather about what they represented—a U.S. military foothold in the heart of Eastern Europe.

****
Secretary Gates, in a follow-up press conference, emphasized that, contrary to a Wall Street Journal headline, Obama was not "scrapping missile defense in Europe." Rather, he was adjusting the program. Rather than building huge, fixed GBI complexes in Eastern Europe, he would buy more small, mobile SM-3 missiles and place them, initially, on the U.S. Navy's Aegis cruisers.

At some point, no earlier than 2015, the SM-3s might also be deployed on ground bases in northern or southern Europe, "in consultation with allies," Gates said, "starting with Poland and the Czech Republic." (Notice: He didn't say the anti-missile missiles might be based in those two countries—though that's not out of the question—only that those countries would be the first consulted on the matter. A more likely base, if Iranian missiles are the concern, would be Turkey, though Gates didn't say that, either.)

The SM-3s are capable of shooting down short- and medium-range ballistic missiles, unlike the GBI, which is designed to shoot down intercontinental ballistic missiles. But Obama and Gates said this morning that this feature is appropriate, since recent intelligence indicates that Iran is making faster progress on developing shorter-range missiles and much slower progress on ICBMs.

In other words, Gates claimed, Obama's plan provides "a better missile-defense capability" for Europe—a plan that is more flexible, less vulnerable, and better suited to the actual threat than the plan that he himself advocated three years ago under President Bush.
Is this true, or is it post-hoc rationalization? A bit of both.

For one thing, Bush's plan to put GBI complexes in Poland and the Czech Republic was not meant to defend Europe. Rather, the initial discussions of a European missile-defense plan, in 2003-04, focused on using these weapons to shoot down missiles launched by Iran as they passed over Europe on their way to the United States. The interceptors could provide protection for some parts of Europe, but that wasn't the main intent.

So, yes, to the extent the SM-3s work, they would protect Europe more than Bush's plan would have. Whether they work—whether they really can shoot down ballistic missiles—is another question. Certainly, short-range missiles are easier to shoot down than ICBMs: they travel more slowly, their trajectory is easier to track, their warheads are smaller, meaning there's less room for decoys or other devices to throw off the missile-defense system's radar.

In some ways, though, the question hardly matters. Obama has made little secret of his skepticism about the missile-defense program as it existed under the Bush administration. He has said, in past speeches, that he would support a missile-defense program if it proved effective in tests, knowing full well that the program—the larger program, involving the GBI complexes—has performed rather poorly in tests. (The SM-3s have done better against short-range missiles, though little information has been released about the precise design of those tests.)

Obama also clearly wants to revive relations with Russia—a goal that he and many of his advisers view as critical to the success of his broader policies to fight global terrorism and to curb nuclear proliferation. The plan to put missile defenses in Eastern Europe was seen by the Russians as a threat, an attitude that isn't unreasonable from their point of view. It seems silly to throw a wrench in this relationship—and thus sharply reduce the chance of success in these vital areas—in order to preserve a missile-defense system that doesn't seem likely to work anyway.

However, it is impolitic—it risks rousing accusations of being "soft on defense" or worse—for any president (or most senators and House members) to say out loud that missile defense isn't likely to work and that, therefore, the program should be scrapped. (I'm not saying that Obama thinks this; I'm saying only that if he does think this, he couldn't say it.)

Obama's plan—scuttling the GBI complexes in Eastern Europe and instead putting more SM-3s on Aegis cruisers, which can be put in the Mediterranean or anywhere—manages to undercut the Russians' rationale for continuing their intransigence while, at the same time, it assures the Europeans that the United States will continue to provide a defense against missile attacks, that it will in fact do so more quickly and effectively than the original plan would have.

You can (and should) read Kaplan’s entire piece here.
Posted by Sisyphus at 9:58 AM