Are we heading off the cliff with anti-Obama hysteria? 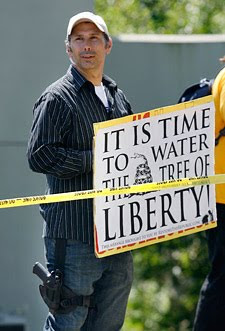 It was perplexing to read in the local newspaper this morning decisions by local school officials to either not show President Obama’s speech directed to the nation’s school children or setting some sort of system for parents to block their children from hearing the speech. And it isn’t just Virginia, there is opposition popping up elsewhere in the country to allowing children to listen to an address from the President of the United States.

The speech is scheduled for the opening day of most schools next Tuesday and the message to the students is simply that they should stay in school and maximize their educational opportunities. Why is this message so controversial? Other Presidents have addressed school children with little outcry but, of course, other Presidents were white.

Joan Walsh at Salon looks at the irrational paranoia that has become so public:

… I never imagined the outbreak of right-wing crazy that Obama's gesture would provoke, and this time it's hard not to see racism behind the hysteria. The message is "Obama's coming for our children!" the standard cry against scary boogeymen in every culture. I mean, really, what besides Obama's race could make him so scary to these people? That he's a Marxist socialist fascist Nazi? I'd argue that the only reason those extreme epithets have taken hold goes back to reason No. 1: Our first black president is provoking some outsize and irrational reactions.

Especially since, as has now been well-documented, President George H.W. Bush addressed American students in 1991, and Ronald Reagan did so via C-SPAN in 1988. (Bush talked mainly about the importance of education, while Reagan hailed the benefits of low taxes and the line-item veto.) President George W. Bush appealed to "the children of the country" to back the war against the Taliban in Afghanistan in 2001, to no public criticism. Admittedly, some Democrats accused his father of playing politics in '91, while Newt Gingrich ardently defended him. (Waiting for Gingrich to defend Obama. Still waiting.)

But there was nothing like the frenzied reaction to Obama's planned speech (which school principals are free to ignore if they so choose) to any of the other presidents' statements to students. The Florida Republican Party went into full-tilt crazy against Obama's plan to spread his "socialist ideology," claiming "schoolchildren across our nation will be forced to watch the president justify his plans for government-run health care, banks, and automobile companies, increasing taxes on those who create jobs, and racking up more debt than any other president." State party chairman Jim Greer called Obama the "Pied Piper" -- you remember, the shady guy who lured kids away from home. Since Obama merely plans to tell students to stay in school and work hard -- an early draft of lesson materials that asked them to talk about ways they could help the president was scotched -- Politifact gave the Florida GOP its "Pants on Fire" designation.

But that's not stopping other blowhards of the Pants on Fire Party. Lunatics like Pamela Heller of Newsmax, radio host Brian Fischer and WorldNetDaily's Bob Unruh are trying to organize parents to take their kids out of school for the day. Texas Gov. Rick Perry says he's "troubled" by Obama's speech. Crazy Glenn Beck and Michelle Malkin are raging against "indoctrination" while Townhall's Meredith Jessup is calling it "a massive abuse of government power."

And lest you dismiss these rantings as confined to the lunatic fringe and ratings-crazed talk-show hosts, the backlash has had an effect. First, after school administrators in mostly red states expressed concerns about exposing kids to the speech without knowing what's in it, the president's office said he'd make it available on Monday so they can read it in advance. OK, that's nice of the president, but is anybody else a little rattled that some right-wing bullies appointed the nation's unelected school administrators to vet our president's speech? And even that wasn't enough for administrators in six states: Districts in Missouri, Minnesota, Wisconsin, Illinois, Virginia and Texas are telling reporters they won't show Obama's speech to students on Tuesday. …

Where to start to explain this hysteria? Since the height of Sarah Palin's dishonest and divisive campaign last September, I've been alarmed by the unique way in which Obama's opponents paint him as "the other." For the life of me, I can't think of another American politician -- not even Hillary Clinton, although it's close -- who has spurred such visceral, irrational hatred. …Sure, John Kerry was "French" and Michael Dukakis was Greek …, but only Obama is a Marxist Communist who pals around with terrorists and wants to harm your children.

The hysteria Obama inspires in his far-right foes is primeval, primordial. From the Birthers' obsession with the facts of his birth -- which lets them obsess about his origins in miscegenation -- to the paranoia that he's coming for the children, there's a deep strand of irrational paranoia that can't be anything other than racial. These people don't merely disagree with him, they distrust and dislike him viscerally. He's not merely wrong, he's scary; even terrifying.

I've said this before, to little result, but it's past time for mainstream, responsible Republicans to stand up against this latest irrational attack on the president. …

And Joe Klein, as part of his report on some of the lunacy he observed at a town hall meeting in Arkansas, worries that civil discourse is not working and the nation may be heading for a cliff:

….The amazing thing remains not only the unwillingness of responsible Republicans--a term that is in danger of becoming an oxymoron--to call bull-- on this, but also the willingness of many prominent Republicans to join in the slinging of garbage. Michelle Cottle reports that there are Republican-sanctioned efforts afoot to have parents not send their children to school on September 8 because the President is scheduled to address the nation's school-children that day and they are afraid that he will fill their little heads with socialist propaganda. That is somewhere well beyond disgraceful.

Could I just say that the intensity of this getting pretty scary...and dangerous? We are heading toward a cliff and the usual brakes of civil discourse are not working. Indeed, the Republicans have the pedal to the metal--rushing us toward a tragedy far greater than the California health care forum finger-biting ... I'm usually not one to panic or be overly worried about the state of our country--even when we do awful things like invade Iraq and torture people, we usually right our course before long--but I have a sinking feeling about where we're headed now. I hope I'm wrong.

Just where are the responsible Republicans?
Posted by Sisyphus at 10:19 AM

I'm in a quandary regarding all this hemming and hawing. Is it real or manufactured, or blown up by the media, or by the irrational who want their position validate by getting on televison?

There are days that I think our nation is back at about 1854, and we're a few years away from the shouting leading to shooting, or, bombing. Still, we went through tempestuous upheavals in our recent history -- ca. 1968-1975 is one particular period.

The nation held, it didn't split in pieces, though there was violence, and bombings and self-immolations.

And I'm also painfully aware that there's already been some shootings, by deranged people who sought to solve their issues by killing the person whom they thought best represented the reason for their unhappiness.

I don't expect we'll see battalions of armed rebels marching on Washington D.C --there's no real leadership to organize such a thing. No, I'm anxious about crazies inciting a kind of guerrilla war that makes governing the nation almost impossible. Maybe I'm over-anxious, and need to just stop watching television, or, for that matter, reading blogs.

But ignorance isn't bliss. It's dangerous.

Are there any left?

I have no idea either, but I am trying desperate to fight lunacy with sense and volume with restraint.