Civilized people can be moved to indecent, uncivilized behavior 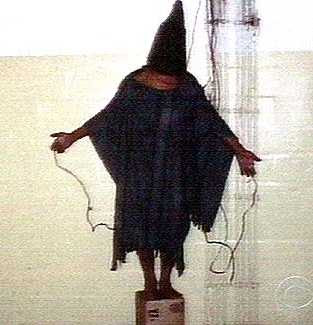 Lillian B. Rubin on the implications of the torture memos:

…Wasn’t the I-was-just-following-orders line the defense of the guards in the Nazi death camps when we tried and convicted them at Nuremberg?

If it didn’t count then, why should it count now? Yes, I know that we can’t compare the systematic torture that was the policy of the German government then with American CIA agents who tortured a few prisoners? But where do we draw the line? Is it okay to torture two but not ten, ten but not one hundred? Is waterboarding a prisoner once acceptable, but 183 times crossing the line?

And who should be held accountable? The torture memos make clear that the actions on the ground rested directly on the green light from the American government’s Justice Department. True, our government wasn’t targeting a whole people, just a few terrorists who may have had information that endangered our security and the lives of our people. But whether the few or the many, those who torture always have what they think is a good reason to do so.

What’s so interesting about it is how decent, civilized people can be moved to indecent, uncivilized behavior by the fear that enables them to dehumanize the other. It’s what makes war and torture possible. Ironically, the torturer doesn’t get off scot free. For in dehumanizing another, we must inevitably dehumanize some part of our self. How else is it possible to inflict unbearable pain on others, to listen to their screams, their pleas for mercy, if not to step outside the self we’ve known—the good son, father, husband, colleague, friend? We become, for that time, someone else, someone whose sadistic impulses are given free rein, and we don’t return to the self we knew without psychological consequences. We see it in our returning warriors who suffer from Post-Traumatic Stress Disorder (PTSD). It isn’t just what others did to them that plagues their inner l lives, it’s also what they did to others.

Whatever the psychological consequences, the release of the torture memos has opened a spirited debate among Americans, revealing yet again the ideological chasm that separates us. Indeed, we can’t even agree on whether we actually tortured detainees. So while some of us are aghast at the revelations; others insist that we didn’t torture anybody—that waterboarding, a torture technique that despotic governments have used since the Spanish Inquisition, was just another one of the “enhanced interrogation techniques” we needed to get information that was vital to our national security. And anyway, it’s not torture if you’re careful not to step over some imaginary line that’s so thin it’s indistinguishable.

Well, I don’t know if the Japanese guards who waterboarded American prisoners during the Second World War were careful or not, but I bet they told themselves similar tales about why what they did wasn’t torture. Or if it was, it was okay because our guys were the enemy, invading their territory and trying to destroy their way of life. Unfortunately for them, the American government considered waterboarding prisoners of war in pursuit of information reason enough to try and execute the Japanese soldiers who did it.

So where does this leave us? I’m not sure. But I’m reminded of Abu Ghraib and Lynndie England, who was tried and convicted for violating military regulations about the treatment of prisoners. Depending on which side of the torture argument you were on, it either seemed appropriate to the crime or a travesty of justice. In fact, it was both. Appropriate, because she brutalized people over whom she had complete power; a travesty, because those who created that atmosphere in which her behavior was acceptable—the officers both on the ground and in Washington—were never held accountable.

You can read the entire piece here.
Posted by Sisyphus at 9:27 AM