Civilians suffer as the army surrounds rebels in Sri Lanka 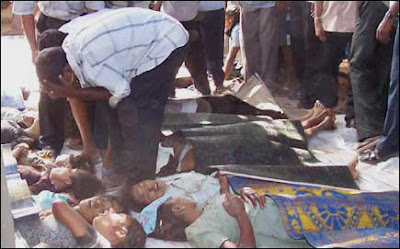 Civil war has plagued Sri Lanka since 1983. The on-and-off conflict in this multi-religious and multi-ethnic nation has pitted a separatist movement led by the Liberation Tigers of Tamil Eelam (LTTE or Tamil Tigers) against the central government. The Tamils make up one of the larger ethnic groups on the island nation and are concentrated in the north and east of Sri Lanka.

The Sri Lanka army has now surrounded Tamil Tiger fighters in a tiny area less than three square miles. Trapped in this war zone are thousands of civilians. The Tamil Tigers are accused of holding these people as human shields while the army indiscriminately bombs the area. In the meantime, another 200,000 civilians who already fled the fighting are overwhelming displacement camps in the north. A humanitarian crisis is very much in the making on this island.

This from the Christian Science Monitor:

As the fighting has shrunk to a narrow strip of rebel-held land, currently less than three square miles, Sri Lanka's military has framed its offensive against the LTTE as the world's "largest hostage rescue mission." On Friday, it air-dropped leaflets into the area that urged Tamil civilians to seek sanctuary in the cleared areas.

That's what happened here on Apr. 20. Overnight, Army commandos crossed the shallow lagoon and captured the LTTE's defensive embankment. The next morning, watched by spy drones, huge crowds of ragged men, women and children streamed out on foot. By 10 a.m., 5,000 had crossed into government-held territory. At 10 p.m., the number rose to 35,000, in addition to those who escaped north along the sands. In total, 115,000 civilians escaped this way, the military says.

Commanders say that if they can penetrate the final LTTE redoubt, the remainder of the trapped civilians can flee, leaving the rebels to surrender or die. More than 3,000 have surrendered so far. The military insists that no bystanders are harmed in the rescue efforts. "We continue this operation with the aim of not causing any casualties to civilians," Gen. Dias said.

A recent internal UN report, however, estimates that nearly 6,500 civilians had died in the war zone prior to the Apr. 20 outflow. On Saturday, medical officials in the LTTE-held area told the BBC and other news agencies that scores had died during two days of government shelling that hit a makeshift hospital. The government denied the claim.

It has also pushed back against leaked UN satellite data that appeared to show recent aerial bombardment of civilian areas. The release of the satellite images, which Sri Lankan officials say are inconclusive, appear to be part of an internal UN row over how far to expose what some UN officials are calling war crimes by both sides.

Human rights groups and other observers warn that any final offensive would spell disaster for those caught in the crossfire. A repeat of the Apr. 20 exodus is complicated by the area's topography and the ruthlessness of the LTTE, which is killing anyone caught escaping by boat or land, says another aid worker in direct contact with civilians there.

Ramani Hariharan, a retired Army colonel who was an intelligence chief during India's 1987-1990 peacekeeping operation in Sri Lanka, says it would be almost impossible to distinguish civilians from fighters in the densely packed area. "It's not a neat operation. It's going to be messy. Messy operations lead to casualties," he says.