This economic emergency requires our full attention, our imagination, and action on a grand scale 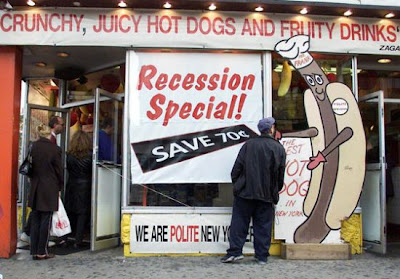 The economic crisis the country finds itself in is far more severe than anything we have experienced since Great Depression. Consumption and investment are both taking hits which mean there is no growth. We cannot afford the luxury of allowing ourselves to be hobbled by free market ideology. Bold action will be required to salvage the system that supports and promotes our livelihoods. James K Galbraith is promoting aggressive public action building on the historical experience and surviving institutions from the New Deal and the Great Society:

The first priority must be to plug the tax gaps that are rapidly taking down state and local governments and causing enormous pressure for cuts in vital public services, and layoffs, which will only complicate further the housing crisis. Revenue sharing is the way out of this problem. This is just a matter of writing checks, on a large scale — and a bill could be enacted and on the President’s desk on his first day.

Second, capital markets for municipal and for state governments are locked up and if they’re not locked up, then they’re far too expensive. A National Infrastructure Fund could take advantage of the very low rates at which the federal government can now borrow, permitting states and localities to move forward on an entire array of “shovel-ready” investments. That too is just a matter of setting up a rudimentary structure that could be enacted and delivered to the President in a very short time.

The industrial crisis requires immediate action if the auto companies are to survive. For such cases in the future (and there probably will be some) the relevant precedent is the Reconstruction Finance Corporation, headed during the New Deal by an intrepid businessman, Jesse Jones, who saved many important companies with a combination of loans and workout plans. A new RFC would enable the federal government to assist industries– perhaps not as large, not as essential, or as threatening as the collapse of the automobile industry would be — but on a somewhat systematic basis for the duration of the crisis.

As for helping the workers who are most severely affected by the industrial aspects of this crisis, Teresa Ghilarducci, professor of economics the New School, has proposed a simple and effective step that would further the cause of universal health care: reduce the age of Medicare eligibility to the age of 55. That would take much of the cash burden of healthcare costs off of enterprises, where they don’t belong anyway. And it would provide the opportunity for many workers who would like to retire but won’t do so because they can’t afford to lose their health insurance.

The housing crisis requires mortgage abatement, a resetting of the toxic adjustable rate mortgages already being initiated through Fannie Mae and Freddie Mac, and also a concerted effort out in the neighborhoods to restructure mortgages and to keep people in their homes. Here the historical model is the Home Owners Loan Corporation, which did this in the 1930’s — an enterprise that took about 20,000 people to manage 1 million mortgages. Essentially the same effect could be achieved today by buying back the mortgages through Fannie and Freddie and then turning them over to a restructuring facility – the present version is known as the H4H, or Hope for Homeowners program.

The point is that while you cannot effectively stabilize the price of housing, you can try to save the existing housing stock, stop the spread of blight, the abandonment of homes, and the homelessness that results from an unchecked wave of foreclosures. We will then have preserved those neighborhoods and those communities for a better day.

Further, we have to expect that the fall of the stock market and its impact on the wealth position of the elderly and the near-elderly is going to cause a substantial drop in consumption over the next few years. This is not something that can be repaired individually because people’s stock market losses cannot be made good on a case-by-case basis.

But we can support the income of the elderly population as a group. The way to do that is, for the first time in a generation, to raise the basic Social Security benefit, beyond the cost of living. That would prevent many seniors from falling into poverty and also help to preserve the purchasing power of the elderly as a whole. Today we need Social Security more than ever. We should recognize that going forward it will be a larger, not smaller, part of American retirements. The days when we thought that the stock market might someday substitute for it are at an end, and so should be talk of cutting back on this vital program.

Meanwhile, to protect the Social Security Trust Fund and put an end to talk about financial troubles of that system, Congress could simply place assets acquired under the TARP and related programs into the trust fund, as William Spriggs, professor of economics at Howard University, has proposed.

These measures, in 2009 alone, could inject $450 to $500 billion dollars of new demand into the economy. That would be enough to blunt the economic decline. We therefore need to consider tax relief to working families either directly or indirectly through remission of the payroll tax. It’s a simple, effective means to give a pay raise, and to cut the cost of hiring to employers. It would help many working families to pay their mortgages and to stay in their homes and to pay down their debts. Even if it didn’t immediately boost in total spending, it would put American families on a better foundation going forward.

What is the total size of the package we would require? News reports suggest that President-elect Obama and his emerging team are considering $600 billion, or 4 percent of GDP, for next year. This number is based on a guess, namely that the slump will not be much worse than in 1982, when the unemployment rate went up to about 11 percent. And while that might be right, we cannot be sure.

If we do too little—if we spend $400 billion when $600 billion is required, or $600 billion when $900 billion would have been better—then people will say “Gosh, that didn’t work.” And by then the new administration will have run down its political capital and we may find that it can’t come back for a second bite at the apple. The program we enact in early 2009 needs to show results the first time — and that means bigger rather than smaller.

If we get lucky … and later find that economy is recovering rapidly that suddenly we’ve succeeded, we can always declare victory and pull back from spending more. A trigger mechanism might even be appropriate, to reduce tax relief if joblessness falls below five percent or revenue sharing if state and local budgets return to surplus. In my view, the chances of activating such a trigger are low.

This emergency requires our full attention, our imagination, and action on a grand scale. One hundred and forty-six years ago, the President wrote to Congress:

“The dogmas of the quiet past are inadequate to the stormy present. The occasion is piled high with difficulty and we must rise with the occasion. As our case is new, so we must think anew and act anew. We must disenthrall ourselves, and then we shall save our country. Fellow citizens, we cannot escape history. We of this Congress and this administration will be remembered, in spite of ourselves.”