Summing up the Bush legacy 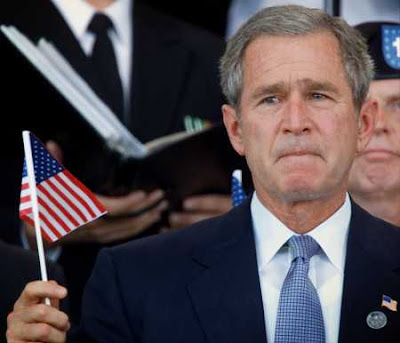 With only a few weeks left before the swearing in of the new president, it is worth considering the legacy Bush administration will be dropping into the lap of Obama presidency. Unfortunately, George Bush will be leaving the country far weaker than he found it eight years ago.

This analysis is from the L.A. Times:

As President Bush's term comes to a close, the United States has the world's largest economy and its most powerful military. Yet its global influence is in decline.

The United States emerged from the Cold War a solitary superpower whose political and economic leverage often enabled it to impose its will on others. Now, America usually needs to build alliances -- and often finds that other powers aren't willing to go along.

In the 1990s, America exerted leadership in all the remote corners of the globe, from the southern cone of South America to Central Asia. Now, the United States has largely left the field in many regions, leaving others to step forward.

Bush has been blamed widely for the erosion of American prestige. And the decline in U.S. influence is partly the result of the reaction to his invasion of Iraq, his campaign against Islamic militants and his early disdain for treaties and international bodies.

A decade ago, the U.S. might have been able to bring enough economic pressure on its own to force an end to Iran's disputed nuclear program, said Nikolas K. Gvosdev, professor of national security studies at the Naval War College.

But Iran has built economic ties to China and India, among others, so the United States has to assemble a much larger group if it hopes to force Tehran's hand.

"Ten years ago, the U.S. was generally the only game in town, and it had the power to close or crack open the door to Iran," Gvosdev said. "Now other countries have more options. . . . This doesn't mean the United States is weak, but it can't unilaterally impose what it wants."

The U.S. National Intelligence Council issued a report this year, "Global Trends 2025," that notes a shift of economic power from the West to the East that is "without precedent." In 2025, the United States will "remain the single most powerful country, but will be less dominant," it predicts.

Since World War II, the United States has led by its power of persuasion, as well as its economic might. But other countries' unhappiness with the Iraq war and the conduct of the Bush administration's "global war on terror," means that the "American brand is less legitimate and its persuasive powers are compromised," said Charles Kupchan of Georgetown University and the Council on Foreign Relations.

There also has been a dwindling of U.S. influence as the administration has focused most of its energy and resources on the Middle East and Southwest Asia, leaving much less for Central and Southeast Asia, Latin America and other regions. Many are going their own way, developing new ties among neighbors.

Latin American countries, for example, are building an organization called the Union of South American Nations and a NATO-like defense alliance called the South American Defense Council. The United States, long dominant in the hemisphere, is pointedly excluded from both.

An 8-year-old group called the Shanghai Cooperation Organization, with Russia, China, and four Central Asian states, has been slowly developing, in part because some members want a bulwark against U.S. involvement in the region.

Other countries are leading diplomatic initiatives that once would have been the province of the United States.

Qatar has taken the lead in brokering a deal between Syria and Lebanon, and Turkey has been acting as an intermediary between Israel and Syria.

As the United States' political standing has eroded, its economy has remained powerful. Its gross domestic product of $14 trillion a year dwarfs China's $7 trillion, adjusted for purchasing power.

Yet American influence on world economic policy is declining, too. One sign: the failure of the United States and its allies to sell a new agreement to the World Trade Organization in the face of opposition from China, India and other nations.

"The influence of the U.S. private sector is as strong as ever," said Gary C. Hufbauer of the Peterson Institute for International Economics. "But the United States is much less able to shape world policy these days."

Many analysts expect that the economic crisis, for which the U.S. is blamed by much of the world, will convince many countries that they shouldn't emulate the loosely regulated American economic model.

You can read the entire piece here.
Posted by Sisyphus at 11:51 PM