Middle East brinkmanship and the rush into the abyss 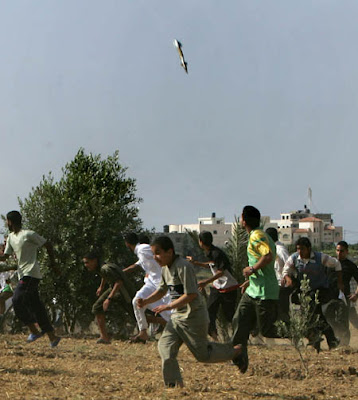 An Egyptian-brokered cease-fire was agreed to by Hamas and Israel in June of this year. However, hostilities did not end and Israel resumed its blockade of the Gaza Strip leading to widespread shortages.

In mid-December, Israel announced it favored extending the cease-fire if Hamas adhered to its conditions. Hamas, citing the Israeli blockade and border closures, ended the cease-fire and resumed rocket launches into southern Israel. Israel, in turn, retaliated with air strikes and may launch a ground invasion within the next few days.

Gershom Gorenberg has these thoughts on the lost opportunities from the six-month cease fire between Hamas and Israel:

Israelis don’t see the effects of the siege in Gaza, or the way it was maintained during the six-month “calm.” Israeli journalists have a far easier time covering Mumbai than covering Gaza. What Israelis saw during the “calm” were Palestinian violations. Israel claimed that Hamas wasn’t keeping the agreement. That was true. It was also true that the Israeli government continued hoping, against all evidence, that the siege would provoke popular uprising against Hamas rule. Hamas regarded the calm as a failure in relieving siege conditions.

When the six months ended, Hamas decided that those Israelis would only understand force. To a man with a hammer, as the saying goes, everything looks like a nail - especially to an angry man. With a little careful thinking, anyone on the Hamas side could have figured out that no Israeli politician wanted to agree to reduce the siege in response to rocket fire. That would be giving in.

So brinkmanship led to both sides rushing over the brink into the abyss. Olmert, Livni, Barak and the collected generals apparently think that Hamas will agree to reduce violence as a result of the onslaught. A ten-second exercise in trying to imagine how Hamas leaders - or Gaza residents - see the situation leads to the opposite conclusion.

It is possible that the new offensive will shatter the Hamas government. In that case we’ll have a collapsed state in Gaza, where there is absolutely no one interested in stopping rocket fire. Will Israel occupy the Strip again then? Does our triumvurate think that NATO will want the job? Outside of showing that we have a bigger hammer, what will the operation accomplish?

Outside of the hammer, actually, Hamas did have some delicate tools in its tool chest. It could, for instance, have proposed indirect negotiations aimed at a two-state solution. That would have caught Israel’s leaders totally off guard, and undermined the political rationale for the siege. I guess that no one in the Gaza leadership considered this for 10 seconds.

Then again, before the “calm” ended, Israel could have passed the message that it was willing to recognize a Palestinian unity government and end the siege. Instead, our leaders continued to follow the policy that has failed since the Palestinian elections of 2006: Trying to undo the results via siege tactics.

The people with hammers, too proud to use anything but hammers, have now swung them at blasting caps. They will argue: We need to maintain a credible military option. They forget that a military option is not credible when it cannot produce the results you want (unless the only result you want is a body count). “What did you expect us to do?” they’ll say.

We expected you to think, to be smart enough to imagine how the other side would respond to your actions, to understand that they too are prisoners of pride and fury.

Actually, we didn’t expect that. We only hoped.