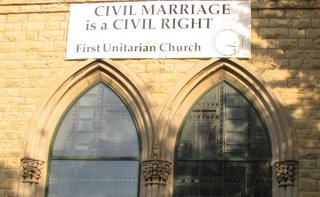 The ballot in Virginia this fall will include an amendment to the Virginia Constitution to define marriage as between one man and one woman. This is part of that national movement to deny the benefits of marriage or civil unions to an entire class of people – in other words, it is an attempt to write discrimination into the state constitution.

The full text of the amendment:

"That only a union between one man and one woman may be a marriage valid in or recognized by this Commonwealth and its political subdivisions.

This Commonwealth and its political subdivisions shall not create or recognize a legal status for relationships of unmarried individuals that intends to approximate the design, qualities, significance, or effects of marriage. Nor shall this Commonwealth or its political subdivisions create or recognize another union, partnership, or other legal status to which is assigned the rights, benefits, obligations, qualities, or effects of marriage"

There are plenty of reasons why this amendment is a bad idea. There will be more on that later. For now, the odds of this passing in Virginia are probably pretty good although the overly broad language outlawing legal status of relationship of unmarried individuals jeopardizes the benefits and obligations of individuals regardless of their sexual orientation. The language of the second paragraph may be a drag on the pro vote.

The code of Virginia requires the State Board of Election to provide information for the electorate explaining amendments that are “neutral” and "shall not include arguments submitted by either proponents or opponents of the proposal." These explanations are disseminated on brochures from the state. The language of this explanation need only be approved by the Privileges and Elections Committee (P & E) of both the House and Senate but not the entire General Assembly.

The supporters seem to want to take no chance of its possible defeat however unlikely that may be (at this time). In addition to the neutral language drafted by the Division of Legislative Services, Attorney General Robert McDonnell (and likely 2009 gubernatorial candidate) has proposed the following addition:

The problem with this language is that it is misleading as to what the amendment says -- it is written as if the whole second paragraph of the proposed Amendment does not exist. It is also opinion of the Attorney General which is not legally binding on the interpretation of the law by the courts. It is downright dishonest and says a lot about the integrity of those supposedly worried about the integrity of marriage.

As of this writing, the Attorney General’s addition has been approved by the House P & E Committee. Let’s see if the Senate P & E Committee has the guts to say no to Mr. McDonnell and yes to honesty with Virginia voters.
Posted by Sisyphus at 10:06 PM