Iran and the Letter 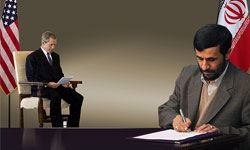 Describe President Bush as you will -- uninspired, weak, lame, inarticulate, incompetent, a one gallon head under a ten gallon hat, etc. -- but the word strange is one adjective that usually doesn’t come to mind. The picture above is….simply….strange. What is strange about it is that it comes from the website purportedly of the President of Iran, Mahmoud Ahmadinejad. It is a depiction, of course, of him writing his now famous or infamous letter to President George Bush and of President Bush reading his letter.

The White House website is a little over the top with pictures of a smiling President Bush but there is nothing really strange about those photographs -- sappy maybe but not strange. The picture above is a sign of someone who takes himself a little too seriously. And that said, we do need to keep in mind the two men in that picture may decide whether or not the region goes up in flames (again). That is a scary thought.

The letter was the buzz around Washington for several days and there is still debate about how to respond or respond at all. Hendrik Hertzberg, in this week’s New Yorker, wrote:

Most likely, he wrote this letter by himself, or by himself with the help of underlings too terrified to tell him how weird and scary he was sounding. It was certainly not drafted by the Iranian foreign ministry, which still has professionals on its staff.

The Bush administration is refusing to respond to the letter because it failed to discuss the issue of the Iranian nuclear program which has a good deal of the world concerned. Hertzberg continues:

Thanks in part (but only in part) to the Iraq fiasco, going to war, in the air or on the ground, is a very, very bad idea. That leaves diplomacy, backed by the threat of sanctions. The Administration’s dismissal of Ahmadinejad’s letter is of a piece with its broader approach, which is a refusal to negotiate, or in any way to engage, directly with Iran and its opaque government.

It’s true that the letter offered no specific openings on the nuclear issue. But there is such a thing as public diplomacy. Ahmadinejad’s letter was an example—and, both despite and because of its lunacy, a pretty effective one. The struggle against Islamist extremism, the Administration often reminds us, is, among other things, a battle of ideas.

You may read the English version (compliments of the Iranian government) of the letter here.

(By the way, check out the Caption Competition at Harry’s Place.)
Posted by Sisyphus at 9:47 PM