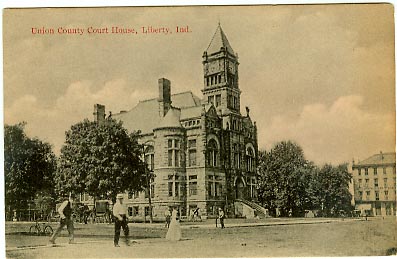 This is an old postcard showing the Union County Courthouse in Liberty, Indiana where I grew up. I am guessing that the photograph was taken in the very early part of the 20th century (the streets have yet to be paved). The courthouse is in the center of town. The architecture and size of the building (it is probably the tallest building in the county) represents a certain dignity and reminds the residents they are part of something much bigger than themselves -- the community at large.

Coming to Virginia and traveling throughout the state I have yet to see a courthouse that commands the respect this building does. In fact, the only memorable thing about most courthouses I can recall are the statues of Confederate soldiers on the courthouse lawns facing south with their backs to Washington -- symbols of bitterness rather than community.
Posted by Sisyphus at 12:18 PM