Governor McDonnell and the Lost Cause of Confederate History Month 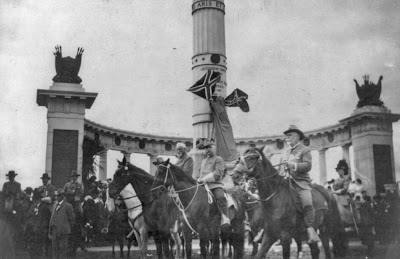 Virginia Governor Robert McDonnell’s Confederate flag waving has, quite rightly so, landed him in hot water. He is now backtracking on his Confederate History Month proclamation by amending it (quite courageously 150 years after the fact) that slavery was bad. From today’s Richmond Times-Dispatch:

After two days of poundings by Democrats, Gov. Bob McDonnell apologized for omitting a reference to slavery in his proclamation designating April as Confederate History Month and amended it to include a condemnation of "the evil and inhumane practice."

The governor said in a statement that his proclamation "contained a major omission."

"The failure to include any reference to slavery was a mistake, and for that I apologize to any fellow Virginian who has been offended or disappointed. The abomination of slavery divided our nation, deprived people of their God-given inalienable rights, and led to the Civil War," McDonnell said in a statement yesterday afternoon.

Let’s get one thing straight. Confederate History Month is not about history. It is about mythology. It is a backdoor approach to promoting the “Lost Cause” version of the American Civil War and Reconstruction.

McDonnell originally left out any reference to slavery in the original proclamation about Confederate History Month because “he wanted to include issues he thought were most ‘significant’ to Virginia”. In 1860 approximately one out of three Virginians were slaves and a major factor in secession by the political elite was to make sure that one-third stayed enslaved. It was pretty significant at the time. For those who still deny slavery as a significant issue leading to the Civil War, historian James McPherson points out:

With respect to the governor’s statement that "Obviously it involved slavery. It involved other issues. But I focused on the ones I thought were most significant for Virginia," I suppose his statement is accurate in a literal sense.

The war did involve slavery, and it did involve other issues, and I am sure that his statement focused on what he thinks are most significant for Virginia--whether they really were or not.

What is misleading about the statement is that slavery was at the core of the events that provoked the secession of the first seven states from December 1860 to February 1861.

If it had not been for the election of an antislavery party to the presidency, there would have been no secession, no firing on Fort Sumter, and no secession by the other four states (including Virginia) that followed the first seven out after Fort Sumter.
The vote in favor of secession at the Virginia convention on April 17, 1861, was 88 to 55.

Most of the anti-secession votes came from the Shenandoah Valley and from the mountainous counties of western Virginia (which eventually became West Virginia), where slavery was of less importance than in the Piedmont and Tidewater regions that voted strongly for secession, and where slavery was a crucial part of the socioeconomic order.

In fact, there was a pretty direct correlation between the percentage of slaves and slaveholders in a given district and its support for secession.

The truth is the plantation class in the South manipulated the political institutions of the region to secede from the United States in order to preserve their right to own slaves and successfully managed to rally the population to take up arms against their own country in order to protect privileges of the plantation class. The loss of the war did not end the conflict but gave rise to domestic terrorism via the KKK and a century of second class citizenship for former slaves enforced by the laws and customs of Jim Crow. That’s the reality that gets glossed over by promoters of Confederate heritage.

Governor McDonnell took a giant step backwards for Virginia by declaring April (the month of Virginia’s secession in 1861) as Confederate History Month and tiny baby step forward by amending the proclamation with a statement that slavery was not O.K. His apology for his “omission” is better than nothing at this point but it would have been better had he chosen not to honor this regrettable episode in history in the first place.
Posted by Sisyphus at 10:26 AM

how to write a bibliography said...

Topic is very good, Thank you very much for your information, nice job keep it up.
how to write an annotated bibliography | dissertation

McDonnell comes across as needing to please all sides (at best) and as a closet far-right extremist trying to masquerade as centrist (at worst). I was very disturbed and disappointed by his response to the State of the Union, which was embarrassing for the State of Virginia. The setting was theatrical and phony (who were those people clapping so hard and why?), the words mere repetition of the standard talking points, and the little personal anecdote completely unoriginal and uninspiring. Weak. It was all show and no substance.

Then he erases gays from Equal Opportunity. And now this Confederate praise? With no updating? As if no time has passed between 1950 and now? He needs to show some intelligence and courage, and show respect for Virginians like myself who came there from other states and whose ancestors fought for the Union. Virginia is now quite diverse, like most of the rest of America. Can you imagine New York or Colorado celebrating Union History Month? It's poor leadership to keep divisive elements energized.