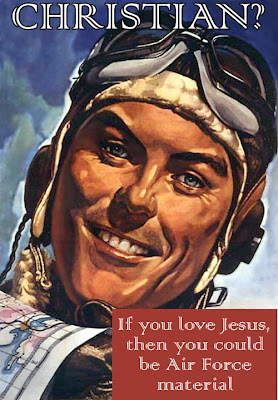 The Christianization of the military is something which should worry Americans. American soldiers and sailors represent the United States, not one religion or another. The military is an instrument of foreign policy and national defense not a religious sword that exists to pry open other nations for the sake of spreading the gospel. Nothing positive has ever come about whenever the armed forces of other nations come under the sway of particular religions and there is no reason to believe the United States military is any different.

Does this organized expression of Christianity have a long tradition in the American military? Not really, according to Jonathan Herzog in the Washington Independent:

So there are atheists in foxholes after all.

Last week, on the eve of Veterans Day, the Secular Coalition for America and the Military Assn. of Atheists and Freethinkers held a news conference in Washington to present an open letter to President-elect Barack Obama. Citing a report that found 21 percent of those in the armed forces identifying themselves as atheists or having “no religion,” the groups called on the new administration to pursue a military policy more open to nonbelievers.

The action follows on the heels of a much-publicized legal case involving atheism and the military. Jeremy Hall, 23, a U.S. Army specialist, grew up a Bible-reading Baptist in rural North Carolina. But his faith in God did not survive the battlefields of Iraq. Since disclosing his atheism, Hall claims he has become a target of insult and scorn — labeled “immoral,” “devil worshiper” and, curiously enough, gay — by fellow GIs and superior officers. But the pith of his complaint runs deeper than personal insult.

In his lawsuit, filed in Kansas last year, Hall and his co-plaintiff, the Military Religious Freedom Foundation, accuse the military establishment not only of prejudice against nonbelievers but of blatant favoritism toward Christianity. As the suit challenging the place of religion in the armed forces lumbers toward a constitutional showdown, Hall and the Secular Coalition for America have sparked a national conversation about one of the military’s least discussed shibboleths.

The battle lines are already drawn. Critics depict Hall’s complaint as a campaign to destroy the spiritual foundation that the nation’s military has depended on for centuries. (“His right to spew his lying hot air cannot be allowed to decrease the morale of soldiers in combat,” writes one Christian blogger.) Meanwhile, the latest crop of best-selling atheists grant Hall some form of secular sainthood.

U.S. martial leaders have long prayed before and after battle: George Washington at the close of the Revolutionary War; George Dewey after his victory against the Spanish fleet at Manila; and Dwight D. Eisenhower on the eve of D-Day. Chaplains have also been key components of U.S. fighting forces, from the ragtag colonial militias to the highly professional units of today.

So when Americans learn that soldiers are being evangelized on military bases, that religious materials are often circulated among troops and that depictions of Washington kneeling in prayer are ubiquitous in military circles, they might likely see all this as an organic part of a venerable tradition.

But these incidents are anything but organic — and not nearly as deeply rooted as one might imagine. In fact, they are largely the residue of a forgotten footnote to U.S. military history during the late 1940s and 1950s — a time when civilian and military leaders attempted to imbue the armed forces with religious zeal and purpose.

At issue today, however, is not the place of religion in the military. Rather, it is the official sanction that government gives it. While this matter is given special weight by those who see America in the midst of a modern holy war against terrorism, it has precedent in the nation’s last great quasi-religious crusade — the battle against atheistic communism.

More than 60 years ago, when the Cold War was menacing but still unnamed, U.S. leaders faced the luckless dilemma of picking their own poison. If they demobilized the military after World War II, as their predecessors had done after previous wars, the Soviet threat might become unmanageable. But maintaining a large standing military would betray a national principle. It was considered profoundly un-American to maintain a powerful armed force in a time of peace. According to a long line of patriots, from Samuel Adams on down, standing armies threatened liberty and smothered virtue.

Added to this dilemma was a spiritual wild card. While Americans today would probably define communism as a political or economic philosophy, decision-makers in the 1940s and 1950s viewed it as a quasi-religion. It had prophets and prophecy, missionaries and martyrs, and a belief in the ultimate perfectibility of mankind through inevitable historical process.

National-security analysts fretted over the almost “messianic” devotion of Soviet citizens. Military leaders worried that physical force alone might be insufficient in the emerging Cold War. “Over and over again, gigantic concentrations of physical power have gone down in defeat before a lesser strength propelled by conviction,” warned one brigadier general in 1949. “The Goliaths have perished at the hands of the Davids.”

President Harry S. Truman decided to run the risk of America maintaining a sizable standing military. But to many, his cure looked worse than the disease. In 1938, only one in five servicemen was younger than 21. Ten years later, they made up more than half the military and accounted for 70 percent of all enlistments. America’s new standing army was regarded as puerile, impressionable and naïve.

Military leaders wondered if they stood on the verge of creating a potential Frankenstein monster. Their plan needed a fail-safe. So they decided not to pull the plug on their monster — but to give it a soul instead. To this end, religion became indispensable.

Military leaders vigorously blended the martial with the sacred to foster virtue and create spiritual warriors immune to the siren songs of communism. In the Fort Knox Experiment of 1947, the army toyed with the idea of simultaneously running new recruits through a physical and religious boot camp. When this proved too blatantly unconstitutional for Army-wide adoption, the “Fort Knox methods” lived on in the Army’s commitment to develop the spiritual side of its troops.

Truman thought so highly of this mission that, one year later, he created the President’s Committee on Religion and Welfare in the Armed Forces, the first presidential commission devoted to religion. Its members designed campaigns to encourage soldiers to attend church; to urge local religious groups to invite servicemen to their congregations; and to revitalize the military chaplaincy.

While the military brass had no stomach for mandatory religious services, it did authorize, beginning in the late 1940s, various “character guidance” programs run by the reorganized chaplaincy. New recruits attended a minimum of six hours of chaplain lectures on such topics as the sacredness of marriage, the relationship between democracy and religion, and the dangerous faith of communism. All other personnel had to attend similar lectures once a month.

Among other things, soldiers learned that in the Cold War, the United States, a “covenant nation” due to its reliance on God, confronted the “demonic nation” of the Soviet Union. In a contest between God and Satan, military leaders bet on the home team.

This was tame compared to the religious programs of the newly independent Air Force. Under Maj. Gen. Charles I. Carpenter, the Air Force project consisted of lay retreats, on-base preaching missions by religious groups and the confiscation of obscene materials.

Carpenter also believed in the power of religion to solve the personal problems of Air Force personnel. Consider one case cited by a U.S. Air Force report. A military surgeon reported treating an airman suffering from a nervous breakdown. The diagnosis: neurosis stemming from religious confusion. The prescription: a session with the base chaplain, who set up a “systematic plan” of religious treatment.

Nor did Carpenter stop there. In late 1948, he struck a deal with the Moody Bible Institute of Science, an evangelical organization devoted to repairing the damage done to religion by Darwinism. Soon, airmen across America and throughout the world were watching films like “God of Creation” and “Duty or Destiny.” The Air Force even provided the representatives of the Moody Institute with a fully crewed B-25. By 1951, nearly 200,000 Air Force personnel were watching Moody films each year.

Nonbelievers like Hall must have existed in the 1950s, or, at the very least, troops uncomfortable with the idea of religious training. But few spoke up. It took a 1962 decision by the U.S. Supreme Court to end the 15-year period of officially sanctioned military sacralization.

In the wake of Engel vs. Vitale, the Supreme Court ruling that deemed prayer in public schools unconstitutional, the Washington director of the American Civil Liberties Union brought grievances of “religious indoctrination” directly to Army Sec. Cyrus R. Vance. Vance responded quickly. In March 1963, he ordered Army chaplains to create a new, secular version of character guidance — outside chapels and without sermonizing. The other services did the same.

As long as the United States remains a religious country, there will be religion in the military. And while the outcome of Hall’s lawsuit is uncertain, it has sparked a worthwhile conversation about faith and the uniform.

Those lamenting Hall’s lawsuit today should consider this slice of military history. From Puritan dreams to evangelical rallies, religion has remained a constant force in our national journey — the military’s in particular.

But the official sanctions afforded it have been anything but constant. Few today realize just how much of the military’s current positions toward religion, far from being longtime American attitudes, are merely vestiges from the Cold War era.

Those cheering Hall’s case should appreciate the extent to which the military has grown more secular over the past few decades. Where once the U.S. Air Force supplied airplanes to evangelists, it now officially insists that commanders “not take it upon themselves to change or coercively influence the religious views of subordinates.”

During the struggle against atheistic communism, comments like those of the Army’s Lt. Gen. William Boykin — who in 2004 called the war on terror a battle against “Satan” — were not only common but celebrated. Today, they are decried by the command structure, including President George W. Bush.

Throughout history, the Davids have sometimes slain the Goliaths. But more often, the stronger, better-equipped force prevailed — with or without the blessings of the Almighty.

Maybe this is what Hall means when he says that while he doesn’t believe in God, he does “believe in Plexiglas.” Whether he wanted to or not, Hall may have stumbled on the ultimate form of “coming out” in the military, and this may require the consideration of military leaders, an appreciation for the military’s religiously sanctioned past and perhaps even a decision from the next commander-in-chief.

If nothing else, it would give a new meaning to the policy of “Don’t ask, don’t tell.”