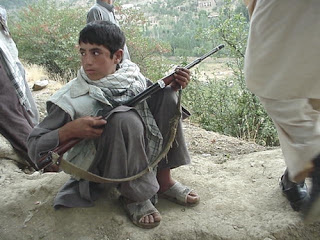 Police, private militias and the Taliban are using Afghan children in their fights against one another. The dysfunctional nature of society in Afghanistan as a result of the war has left children in many regions of the country very vulnerable to exploitation.

Conscription of children often takes place in countries in great turmoil. Recent reports of this activity have included places such as Burma or the Democratic Republic of Congo. Children often work in slave-like situations, are sexually abused and sometimes are even armed and put on the front lines of military operations.

This report from IRIN (via Alert Net):

Children are being recruited and in some cases sexually abused by the Afghan police and/or various militias that support the police, as well as by private security companies and the Taliban, according to human rights and provincial officials.

Some children are recruited for military and non-military purposes by local militias who are paid by the government to supplement the fledgling ANP in volatile southern provinces. However, due to lack of proper monitoring and accountability mechanisms, and the informal nature of the auxiliary forces, the use and abuse of child soldiers remains undocumented.

"Children are used for different purposes," Noorzai said. "The majority of them experience sexual abuse, others do all kinds of jobs such as cooking, cleaning, day patrols and even fighting," he said. Saeed Aqa Saqib, chief of police in Kandahar, told IRIN that over the past nine months a number of police officials had faced dismissal, change of duty station or other disciplinary measure because children were discovered as their immediate subordinates.

"We take this issue [child soldiers] very seriously and will not let it happen within our ranks," said Saqib. In at least two separate incidents in August and September, two under-age soldiers recruited at the Kandahar police headquarters were sacked by the provincial office of the AIHRC. "I told those kids to go home and stay away from military personnel," recalled Noorzai, adding that the recruiters had not been punished.

Under-age males have also been seen working for private security companies, particularly in Kandahar and Helmand provinces, said a senior government official who insisted on anonymity.

"The auxiliary police and private security contractors widely use child soldiers while the government and the AIHRC do not have the capacity to monitor, investigate and stop them," the official said.

Both the chief of police and the head of the AIHRC in Kandahar Province acknowledged that auxiliary forces and private security firms had remained immune from formal investigations and monitoring with regard to the use of child soldiers.

At least two non-government security companies declined to comment on the subject and turned down requests by IRIN to visit their headquarters.

The basic factor driving the recruitment of under-age recruits - mainly boys aged 10-17 - is poverty and unemployment, as well as a certain sense of glamour afforded by the bearing of arms.

Afghan officials also accuse the Taliban and other anti-government elements of deliberately using children for various military and illegitimate purposes. The Taliban use boys as foot soldiers and force children to engage in violent acts, they say.

In a Taliban video released in April, Taliban gunmen helped a young boy to behead an adult accused of anti-Taliban activity, according to the US State Department.

"UNICEF is very concerned about the increasing use of children and youth to commit violent acts in times of conflict," Patrick McCormick, a UNICEF spokesperson in New York, told IRIN.

Over 7,500 child soldiers went through Disarmament, Demobilisation and Reintegration (DDR) programmes between April 2003 and June 2006 under Afghanistan's post-Taliban peace building arrangements, according to the UN.

What I don't understand is how a group that claims to be indebted so highly to an extremely conservative brand of Islam, particularly one so homophobic, can reconcile the fact that its men are engaging in homosexual conduct with minors.

Taken this way, they look like thugs with guns using religion to justify their actions.