Barack Obama: Our moment is now 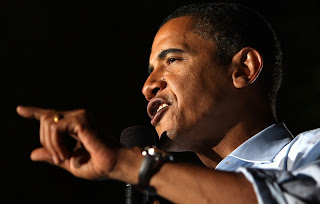 Below is a condensed version of Senator Barack Obama’s remarks for the voters of . The full text can be found here.

Ten months ago, I stood on the steps of the Old State Capitol in , , and began an unlikely journey to change .

I did not run for the presidency to fulfill some long-held ambition or because I believed it was somehow owed to me. I chose to run in this election - at this moment - because of what Dr. King called "the fierce urgency of now." Because we are at a defining moment in our history. Our nation is at war. Our planet is in peril. Our health care system is broken, our economy is out of balance, our education system fails too many of our children, and our retirement system is in tatters.

Most of all, I believed in the power of the American people to be the real agents of change in this country - because we are not as divided as our politics suggests; because we are a decent, generous people willing to work hard and sacrifice for future generations; and I was certain that if we could just mobilize our voices to challenge the special interests that dominate Washington and challenge ourselves to reach for something better, there was no problem we couldn't solve - no destiny we couldn't fulfill.

You know that we can't afford four more years of the same divisive food fight in that's about scoring political points instead of solving problems; that's about tearing your opponents down instead of lifting this country up.

We can't afford the same politics of fear that tells Democrats that the only way to look tough on national security is to talk, act, and vote like George Bush Republicans; that invokes 9/11 as a way to scare up votes instead of a challenge that should unite all Americans to defeat our real enemies.

We can't afford to be so worried about losing the next election that we lose the battles we owe to the next generation.

The real gamble in this election is playing the same game with the same players and expecting a different result. And that's a risk we can't take. Not this year. Not when the stakes are this high.

For the first time in a long time, we have the chance to build a new majority of not just Democrats, but Independents and Republicans who've lost faith in their leaders but want to believe again - who desperately want something new.

We can change the electoral math that's been all about division and make it about addition - about building a coalition for change and progress that stretches through and . That's how I won some of the reddest, most Republican counties in . That's why the polls show that I do best against the Republicans running for President - because we're attracting more support from Independents and Republicans than any other candidate. That's how we'll win in November and that's how we'll change this country over the next four years.

In the end, the argument we are having between the candidates in the last seven days is not just about the meaning of change. It's about the meaning of hope. Some of my opponents appear scornful of the word; they think it speaks of naivete, passivity, and wishful thinking.

But that's not what hope is. Hope is not blind optimism. It's not ignoring the enormity of the task before us or the roadblocks that stand in our path. Yes, the lobbyists will fight us. Yes, the Republican attack dogs will go after us in the general election. Yes, the problems of poverty and climate change and failing schools will resist easy repair. I know - I've been on the streets, I've been in the courts. I've watched legislation die because the powerful held sway and good intentions weren't fortified by political will, and I've watched a nation get mislead into war because no one had the judgment or the courage to ask the hard questions before we sent our troops to fight.

… I know that when the American people believe in something, it happens.

If you believe, then we can tell the lobbyists that their days of setting the agenda in are over.

If you believe, then we can stop making promises to America's workers and start delivering - jobs that pay, health care that's affordable, pensions you can count on, and a tax cut for working Americans instead of the companies who send their jobs overseas .

If you believe, we can offer a world-class education to every child, and pay our teachers more, and make college dreams a reality for every American.

If you believe, we can save this planet and end our dependence on foreign oil.

If you believe, we can end this war, close , restore our standing, renew our diplomacy, and once again respect the Constitution of the .

That's the future within our reach. That's what hope is - that thing inside us that insists, despite all evidence to the contrary, that something better is waiting for us around the corner. But only if we're willing to work for it and fight for it. To shed our fears and our doubts and our cynicism. To glory in the task before us of remaking this country block by block, precinct by precinct, county by county, state by state.

There is a moment in the life of every generation when, if we are to make our mark on history, this spirit must break through

This is the moment.

This is our time.

And if you will stand with me in seven days - if you will stand for change so that our children have the same chance that somebody gave us; if you'll stand to keep the American dream alive for those who still hunger for opportunity and thirst for justice; if you're ready to stop settling for what the cynics tell you you must accept, and finally reach for what you know is possible, then we will win this caucus, we will win this election, we will change the course of history, and the real journey - to heal a nation and repair the world - will have truly begun.

Rezko's trial starts in Feb. Kelly has been indicted and starting to talk and the tip of the iceberg is looking awfully ugley.

Illinois politics is going to reach out ant taint Obama.

If he looks like he's getting the nod, watch the party try too dump him come spring which is going to be really ugley.

Obama says all the right things.

However, having had my heart broken and my trust betrayed by politicians many times before can you blame me for being perhaps a little skeptical?