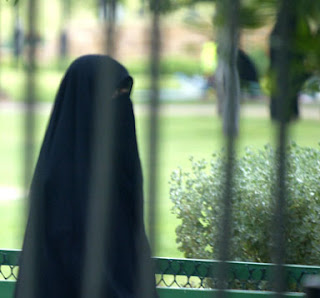 A woman is gang-raped by a group of men. She is convicted of violating the law regarding segregation of the sexes and sentenced to 90 lashes. She appeals and the court more than doubles lashes, adds a six month prison sentence and suspends her lawyer from representing her. This is what justice looks like in Saudi Arabia.

The woman was initially punished for violating laws on segregation of the sexes - she was in an unrelated man's car at the time of the attack.
When she appealed, judges doubled her sentence, saying she had been trying to use the media to influence them.
Her lawyer has been suspended from the case and faces a disciplinary session.
Abdel Rahman al-Lahem told the BBC Arabic Service that the sentence was in violation of Islamic law:
"My client is the victim of this abhorrent crime. I believe her sentence contravenes the Islamic Sharia law and violates the pertinent international conventions," he said.
"The judicial bodies should have dealt with this girl as the victim rather than the culprit."
The lawyer also said that his client would appeal against the decision to increase her punishment.
According to the Arab News newspaper, the 19-year-old woman, who is from Saudi Arabia's Shia minority, was gang-raped 14 times in an attack in Qatif in the eastern province a year-and-a-half ago.
Seven men were found guilty of the rape and sentenced to prison terms ranging from just under a year to five years.
The rapists' sentences were also doubled by the court. Correspondents say the sentences were still low considering the rapists could have faced the death penalty.
The rape victim was punished for violating Saudi Arabia's laws on segregation that forbid unrelated men and women from associating with each other. She was initially sentenced to 90 lashes for being in the car of a strange man.
On appeal, the Arab News reported that the punishment was not reduced but increased to 200 lashes and a six-month prison sentence.
Mr Lahem accused the court of letting personal views influence its decision.
"It seems that the sentence was influenced by the fact that the woman escalated the issue with her lawyer and also with the supreme judicial authorities," he said.
"This is astonishing because justice is supposed to be independent from all pressures as well as personal considerations, be it a feeling towards the lawyer or defendant herself," he added.
The Arab News quoted an official as saying the judges had decided to punish the girl for trying to aggravate and influence the judiciary through the media.
Mr Lahem said that the judges' decision to confiscate his licence to work and stop him from representing his client is illegal.