The oppression of Baluchistan by Pakistan 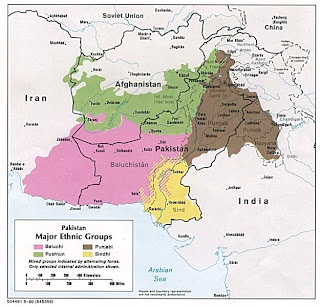 Today marks the 60th anniversary of the creation of Pakistan and India. Pakistan has received a lot of attention in this country given its proximity to the war in Afghanistan and as a ally in the conflict against Al-Qaeda and its Afghan ally, the Taliban.

However, not everyone in Pakistan is celebrating the founding of the nation. Baluchistan is the southwestern portion of Pakistan and Baluch people populate significant portions of Iran and Afghanistan. This happens to be the same area in Pakistan where members of Al-Qaeda and the Taliban have taken refuge.

Baluchistan enjoyed a brief independence prior to being annexed by Pakistan. Many of the Baluch people feel oppressed by the Pakistani government and seek independence.

This is by Peter Tatchell, reprinted at Harry’s Place today:

Pakistan is escalating its war against the people of Baluchistan. In recent years, thousands have been jailed, tortured or killed. Military operations have included the use of chemical weapons. Nearly 100,000 Baluch people have been made refugees in their own land. Pakistan ignores their plight; refusing to allow the UN and international aid agencies to assist these displaced persons.
Simultaneously, the Islamabad imperialists are stripping Baluchistan of its vast natural resources of gas, oil, coal, copper and gold, which include an estimated 19 trillion cubic feet of natural gas reserves and six trillion barrels of oil reserves on-shore and off-shore. Despite this fabulous wealth, the people of Baluchistan live in abject poverty. Much of the population is malnourished and illiterate, living in squalid housing with no electricity or clean drinking water.
To subjugate and pacify Baluchistan, Islamabad is working on a sinister plan to colonise the region with ethnic Punjabis (the largest and dominant ethnic group in Pakistan). The aim is to make the Baluch people a minority in their own homeland, as happened to the Native Americans in the US and the Aboriginals in Australia. This has already been achieved in major cities like Quetta, where colonist settlers, mostly Punjabis, now predominate.
Cultural imperialism is another weapon in Pakistan’s bid to subjugate Baluchistan. Isalamabad believes it has a sacred duty to ‘civilise’ the ‘uncivilised’ Baluch; to transform them into ‘good Pakistani Muslims'. It has imposed an alien language, Urdu, on the Baluchi-speaking people. Urdu is now the compulsory language of instruction in educational institutions.
The cultural conquest of Baluchistan also involves the Islamification of the traditionally more secular Baluch nation. A large number of religious schools have been funded by the Pakistani state, with a view to imposing Pakistan’s harsher, more narrow-minded interpretation of Islam.
***
The Pakistani contempt for the Baluch people is evident in the way they have used Baluchistan - not the Punjab - as their nuclear testing ground, staging five atomic tests at Chagai in 1998. Since then, there have been an unusually high number of deaths of livestock and nomads. Locally-grown food now tastes strange, water supplies have become contaminated and there has been a significant increase in skin diseases, mental disorders and physical deformities in new-born infants.
Pakistan is an oppressed nation turned oppressor nation. A former colony of the British Empire, it now adopts similar imperial tactics to persecute and exploit the Baluch people – and the people of other provinces such as Sindh and North West Frontier. To maintain its iron grip on Baluchistan, the Pakistani military is building three new garrisons at Kohlu, Dera Bugti and Gwader. This expanded military presence is evidence that the Baluch people are putting up serious resistance to Islamabad’s colonial
rule.
***
Pakistani repression is nothing new. After a century as a British protectorate, Baluchistan declared its independence in 1947. It was a short-lived freedom. Within a year, Pakistan invaded and annexed the new nation.
When the British granted independence to India and Pakistan on 14 August 1947 Baluchistan secured its independence as a separate entity from Pakistan, as it was never a part of the British Indian Empire. Both houses of the Baluchistan Parliament rejected the idea of joining Pakistan. But under threat of being arrested by Pakistan Army, as some of his ancestors had been arrested during the British colonial era, Baluchistan’s ruler, Mir Ahmedyar Khan, signed an Instrument of Accession on 27 March 1948 with Pakistan's founder Mohammed Ali Jinnah. This controversial accession, which Khan was not mandated by the Baluch people to sign, promised semi-autonomy to Baluchistan. Alas, genuine self-government never happened.
Despite six decades of Pakistani military occupation, the Baluch people have never given up their quest for independence. A recent Baluch grand jirga, or assembly, decided to approach the International Court of Justice at The Hague to force Pakistan to honour its autonomy commitments under the 1948 Instruments of Accession. Their legal case is strong but realpolitik may deny the Baluch the justice they deserve.
The West’s attitude towards Baluchistan’s quest for the resumption of its brief 1947-48 sovereignty has been less than honourable. Because Britain and the United States want Pakistan as an ally in the so-called “war on terror,” they have armed Pakistan and acquiesced with its suppression of the Baluch.
This is short-sighted political manoeuvring. Pakistan’s war against Baluchistan is strengthening the position of the Taliban, who have exploited the unstable, strife-ridden situation to establish bases and influence in the region. From these bases, the Taliban terrorise the more liberal and secular Baluch people and seek to enforce the Talibanisation of Baluchistan. The Pakistani government tolerates the Taliban, on the grounds that its presence acts as a second force to crush the Baluch people and weaken their struggle for independence.
The Taliban bases in Baluchistan are also hide-outs from which they mount military operations to overthrow the imperfect but democratically elected government of Afghanistan. This campaign to usurp power in Kabul and reimpose a fundamentalist regime seems to be taking place with the tacit collusion of key figures in the Pakistani government, military and intelligence services. The Pakistanis are talking no serious action to stop the Taliban using Baluchistan as a base for its war against Afghan democracy and human rights.

You can learn more at Balochvoice and Balochwarna web sites.
Posted by Sisyphus at 2:34 PM