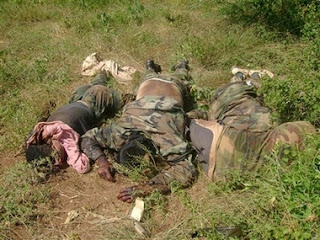 All sides in the current war in Somalia are committing war crimes by indiscriminate bombing of densely populated areas and the execution of captured combatants as well as civilians according to Human Rights Watch. According to the report, “Shell Shocked: Civilians Under Siege in Mogadishu,” the fighting in the Somali capital in March and April resulted in the deaths of hundreds of civilians and the displacement of over 400,000 people. “The warring parties have all shown criminal disregard for the well-being of the civilian population of Mogadishu,” said Ken Roth, executive director for Human Rights Watch. “The UN Security Council’s indifference to this crisis has only added to the tragedy.”

Ethiopia, with the backing of the United States, invaded Somalia late last year. Most Americans were not aware our government was giving full support to Ethiopia until reports came out regarding the involvement of U.S. military personnel in an attack against an Al Qaeda operative that resulted in the deaths of a number of civilians.

All sides have committed war crimes in Somalia's conflict this year, according to lobby group Human Rights Watch.
It says the worst abuses have been by Ethiopian soldiers, who are supporting the government against insurgents.
Ethiopians have often indiscriminately attacked civilian areas and looted hospitals, its report says.
While insurgents have fired mortars into residential areas and executed civilians, since Islamists were driven from power in Mogadishu last December.
Both Ethiopia and the Somali government have denied the claims, reports Reuters news agency. More than 1,000 people were killed this year in the heaviest fighting since 1991, as Ethiopian and government troops tried to drive the insurgents out of Mogadishu.
"The insurgency placed civilians at grave risk by deploying among them," said Human Rights Watch executive director Ken Roth.
"But that is no justification for Ethiopia's calculated shelling and rocketing of whole neighborhoods."
"Commanders who knowingly or recklessly order indiscriminate attacks are responsible for war crimes," the report said.
But these charges were denied by Ethiopia.
"As usual, Human Rights Watch is engaged in its now well-known fabrication, and in misinforming the world in unsubstantiated fairy-tales," Bereket Simon, special adviser to Prime Minister Meles Zenawi, told Reuters.
Somali government troops played a "secondary" role, backing up the Ethiopians but failed to help civilians, said the report - Shell-Shocked: Civilians Under Siege in Mogadishu.
Somali government spokesman Abdi Haji Gobdon told Reuters the government's only goal was "to restore sanity" not "massacre its own people".
The UN says some 400,000 people have fled the violence in Mogadishu in the past four months. HRW says the international community has ignored the suffering in Somalia.
"The UN Security council's indifference to this crisis has only added to the tragedy," said Human Rights Watch executive director Ken Roth.
Mr Roth urged the Security Council to make strong provisions to protect civilians when it discusses proposals to turn the 1,500 strong African Union force into a UN peacekeeping mission.
Since the end of the April offensive, insurgents have continued to stage deadly attacks on an almost daily basis.
Over the weekend, two prominent journalists were killed.
Some 1,600 Ugandan peacekeepers are in Somalia but they have failed to end the violence. A reconciliation conference is under way in Mogadishu but Islamists and the city's clan elders have refused to attend unless the Ethiopians leave the country.