Southern racism and the Jena Six 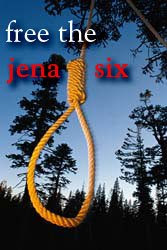 Jena, Louisiana is the county seat of LaSalle Parrish. Its population is approximately 3000 of which 86% is white and 12% is black. A majority of Jena’s white voters in 1991 supported white supremacist David Duke.

Last fall a black student asked school officials if black students could sit under a tree on the high school grounds where white students traditionally congregated. He was told they could. The next day three nooses were hanging from the tree as a warning. From that point a whole series of incidents have spun out of control with the brunt of the conflict falling mostly on the black students and their families.

This is from the Chicago Tribune:

The tree was on the side of the campus that, by long-standing tradition, had always been claimed by white students, who make up more than 80 percent of the 460 students. But a few of the school's 85 black students had decided to challenge the accepted state of things and asked school administrators if they, too, could sit beneath the tree's cooling shade.
"Sit wherever you want," school officials told them. The next day, the nooses were hanging from the branches.
African-American students and their parents were outraged and intimidated by the display, which instantly summoned memories of the mob lynchings that once terrorized blacks across the American South. Three white students were quickly identified as being responsible, and the high school principal recommended that they be expelled.
"Hanging those nooses was a hate crime, plain and simple," said Tracy Bowens, a black mother of two students at the high school who protested the incident at a school board meeting.
But Jena's white school superintendent, Roy Breithaupt, ruled that the nooses were just a youthful stunt and suspended the students for three days, angering blacks who felt harsher punishments were justified.
"Adolescents play pranks," said Breithaupt, the superintendent of the LaSalle Parish school system. "I don't think it was a threat against anybody."
Yet it was after the noose incident that the violent, racially charged events that are still convulsing Jena began.
First, a series of fights between black and white students erupted at the high school over the nooses. Then, in late November, unknown arsonists set fire to the central wing of the school, which still sits in ruins. Off campus, a white youth beat up a black student who showed up at an all-white party. A few days later, another young white man pulled a shotgun on three black students at a convenience store.
Finally, on Dec. 4, a group of black students at the high school allegedly jumped a white student on his way out of the gym, knocked him unconscious and kicked him after he hit the floor. The victim -- allegedly targeted because he was a friend of the students who hung the nooses and had been taunting blacks -- was not seriously injured and spent only a few hours in the hospital.
But the LaSalle Parish district attorney, Reed Walters, opted to charge six black students with attempted second-degree murder and other offenses, for which they could face a maximum of 100 years in prison if convicted. All six were expelled from school.
****
"There's no doubt about it -- whites and blacks are treated differently here," said Melvin Worthington, who was the only school board member to vote against expelling the six black students charged in the beating case. "The white kids should have gotten more punishment for hanging those nooses. If they had, all the stuff that followed could have been avoided."
And the troubles at the high school are not over yet.
On May 10, police arrested Justin Barker, 17, the white victim of the Dec. 4 beating. He was alleged to have a rifle loaded with 13 bullets stashed behind the seat of his pickup truck parked in the school lot. Barker told police he had forgotten it was there and had no intention of using it.

Charges against one of the students were reduced from attempted murder to aggravated second-degree battery and conspiracy to commit aggravated second-degree battery just prior to his trial. Nevertheless, Mychal Bell – the first of the students to be tried – was convicted by an all white jury and can face up to 22 years in prison at his sentencing hearing on July 31. His court appointed defense counsel called no witnesses to counter the seventeen witnesses called by the prosecution. A number of the other students sit in jail awaiting trial because they cannot afford bail.

The authorities have come down very hard on the black students while going easy on white perpetrators. Who got to sit under the “white tree” as school may have triggered this series of escalating conflicts between blacks and whites but the root causes of go much deeper. After all, why was it a tradition for white students only to congregate under the school’s shade tree? The BBC refers to this as "stealth racism." And the conflict in the town continues.

You can hear a broadcast of a report about the situation on NPR here. You can read a transcript of the Democracy Now! radio broadcast about the incident here. Michael David Murphy has a number of photographs on his blog here and a follow-up post here as well as his video clip here. An op-ed piece by Amy Goodman can be found here and a summary of the case by Bill Quigley here. Color of Change, as well as other organizations, has been organizing on behalf of the families – information about the situation can be found here and information about what you can do, can be found here. A demonstration is planned for July 31 in Jena.
Posted by Sisyphus at 1:05 AM