Where will Iraq’s refugees go? 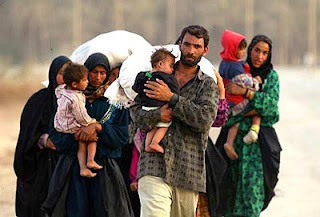 The conflict in Iraq is causing a terrible displacement of the population. Those with the means – frequently the ones with the very skills needed to rebuild the country – are fleeing. Thousands have been abandoning their homes every week with approximately half fleeing to other parts of the country and half leaving the country. The Bush administration is concerned that accepting any significant number of Iraqi refugees might indicate it is losing the war. Therefore, it has allowed fewer than 700 Iraqi refugees for resettlement since the invasion out of the approximately 2 million who have fled the country. This compares to 900,000 Vietnamese from the Vietnam conflict and 12,000 Iraqi Shiites following the Gulf War in 1991. U.S. officials have indicated a willingness to take an additional 7000 but the actual number may be lower.

Anna Husarska is a senior policy adviser at the International Rescue Committee and writes this in today’s Guardian:

Among the many humanitarian disasters produced by the civil war now raging in Iraq is one that is almost invisible. Only rarely do scenes of massive displacement of the civilian population make it on to our television screens, because, unlike bombs and suicide attacks, displacement does not generate the blood, fire, or screams that constitutes compelling footage. Yet the numbers are staggering: each month, some 40,000 Iraqis flee their homes because of the war. Half of them go to other parts of Iraq; the rest go abroad.
Iraq's population, frankly, is bleeding away. This devastation is even more dramatic because, since the invasion four years ago, only 3,183 Iraqis have been resettled in third countries. According to the UN High Commission for Refugees, all countries combined have offered a chance to start a new life to approximately the same number of Iraqi refugees as flee the country in just five days.
This exodus is not new, but since the increased violence that followed the bombing of the Shia Golden Mosque in Samarra in February 2006, the pace of the displacement has accelerated. Indeed, this is the largest population displacement in the Middle East since 1948.
Two million Iraqi refugees are scattered around the region, the great majority of them in Jordan and Syria, with smaller numbers in Turkey, Lebanon, and Egypt. Because they are urban refugees - not housed in tents, but rather blending in with the local population in the host countries - they are easily ignored.
For Iraq, this is a brain drain that will be hard to repair. The country had a total population of 26.8 million, and now nearly 13% of them are displaced; many may never return. But what happens to them?
****
Refugees who are in the country of first asylum usually face three possible choices: return to their homeland, try to integrate in the host country, or be resettled to a third country. But do the Iraqis really have these three choices? Can anyone watching reports of the daily carnage in Iraq envision Iraqis going back?
The answer is no. If the parliament in Baghdad, one of the best protected buildings in the country, can be attacked from within, then no zone in Iraq is Green; they are all Red. Repatriation of Iraqis is unrealistic and definitely out of question for the foreseeable future.
Most Iraqis cannot opt for local integration, either. True, Jordan and Syria let most Iraqis in, but they do not offer a possibility of durable local absorption. Iraqis cannot become permanent residents, and they do not have work permits or access to public health services. In Jordan, Iraqi children cannot go to state schools. It is not a matter of ill will on the part of these countries; they simply cannot afford to extend these services. Helping them to cope with the influx of refugees is necessary, but it is not a durable solution.
This leaves the third possibility - that of resettlement. But for this to happen, countries with traditionally generous refugee programmes should come forward and offer more places to receive Iraqis. The United States is a bad example: only 692 refugees have been accepted since the invasion - roughly the number of Iraqis who are killed every week. In February, the Bush administration announced that it will offer resettlement this year to 7,000 Iraqi refugees. If America makes good on this promise, it would be a big step forward, but the US, which led the intervention in Iraq, should now lead in attending to the victims.
Should the US not take the lead, the only hope is that other countries will be more generous. The refugees are a crisis that cannot be ignored: the international community must alleviate the burden on the countries in the region, while offering resettlement opportunities to many more of the most vulnerable Iraqis.