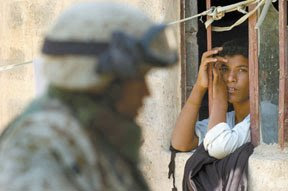 The White House has invested so much in seeking a military solution to what is increasingly a political problem that they have lost sight of any plan to stabilize the region and without that plan Iraq will continue to deteriorate. The “surge” is just a variation of the administration’s blundering and lack of planning. Wishful thinking is not a strategic plan.

The Democrats, even though they are not yet in a position of executive leadership, are now in control of the legislative branch of government and are attempting to fill the vacuum of leadership for the country’s foreign policy. The problem is the Democrats have not gotten beyond simply reacting to the administration’s screw-ups and have not yet jointly formulated a foreign policy with vision. The Democratic candidates for President have been somewhat vague on what their strategic vision of what the United States should be doing in Iraq and the surrounding area. (Senator Joseph Biden may be an exception but as a second-tier presidential candidate it is unlikely his ideas will receive much of a public hearing.)

Trudy Rubin has written an interesting piece for yesterday’s Philadelphia Inquirer about the opinions of Marine Gen. John "Jack" Sheehan, who turned down an offer by the White House to become “war czar” overseeing the conflicts in Iraq and Afghanistan and Ali Allawi, a former official with the Iraqi government. Both men are concerned about the lack of overall vision and plans for the region. She writes:

If you want to know the only plan that has a chance of saving Iraq, I have a suggestion.
Read the words of two wise men. The first, Marine Gen. John "Jack" Sheehan, is one of at least five retired four-stars who declined to be considered for a new White House post of war "czar" for Afghanistan and Iraq.
The second, Ali Allawi, is one of the smartest officials to serve in the Iraqi government since Saddam fell, but left Baghdad in despair over the direction his government has taken. Author of The Occupation of Iraq: Winning the War, Losing the Peace, he spoke at the World Affairs Council of Philadelphia this week.
Both men lament the failure of the Bush team to focus on what happens after the surge. (Add the failure of Democrats to focus on what happens after a troop withdrawal.)
"The very fundamental issue is, they don't know where the hell they're going," Sheehan told the Washington Post, in explaining why he rejected the White House offer. Sheehan argues that the administration has no broad, long-range vision for the Mideast region. "Activities such as the current surge . . . should fit into an overall strategic framework," he says. "The current Washington decision-making process lacks a linkage to a broader view of the region and how the parts fit together strategically."
In other words, the White House is focused on tactics such as the surge, but lacks the vision to recognize that Iraq's problems require more than military solutions.
"The Iraq invasion has created a real and existential crisis for nearly all Mideastern countries," Sheehan says. Without a new regional framework that draws in all of Iraq's neighbors, including Iran, a surge won't stabilize the country. Only intense U.S. diplomacy could do that.
Allawi also argues for a new regional framework. "The invasion of Iraq shattered the previous framework of [Middle East] relations," he says. It ended the domination of Iraq's Sunni minority and put the Shiite Muslim majority in power. It also strengthened the Shiite rulers of Iran.
Sunni Arab states such as Saudi Arabia and Jordan are frightened of Iran's increasing power; the Saudis worry Iran will stir up their Shiite minority. So money flows from Sunni Arab states to Iraq's Sunni insurgents. Iran, on the other hand, is helping the Shiite-led government of Iraq and funding Shiite militias. How can Iraq become stable while its neighbors are supporting opposing factions inside?
U.S. policy toward this problem is schizophrenic. The White House is encouraging Sunni Arab states to unite against Iran and has no direct contacts with Tehran. Yet promoting regional rivalry exacerbates the fighting inside Iraq.
Allawi says Americans "should not withdraw your troops" before settling the broader issues. He says the United States should use its troops as leverage "to push for some kind of new regional framework. We need a diplomatic solution." The timing of U.S. troop withdrawals could be an issue in those talks.
"Somebody has to look after the crockery shop," Allawi adds, "after the china is broken." The reference is to Colin Powell's famous "Pottery Barn rules" - if we broke Iraq we would own it.
Allawi wants the United States to help convene an international congress that would design new rules for Iraq and the region. It would also involve Europeans, U.N. officials, Iraq's neighbors, and Iraqi government leaders. It would have to address the security concerns of both Iran and Sunni Arab countries.
Sound far-fetched? Not if you consider the alternative – sectarian war that continues after the surge ends and unsettles the whole region.
But so far, the White House has refused to engage in serious international diplomacy. To do so would require rethinking its policy toward Tehran. It would require admitting the Iraq invasion has pushed the entire Mideast to the edge.
Indeed, Gen. Sheehan told the Post he believed Vice President Cheney and his hawkish allies were still blocking the pragmatists in the administration. "So rather than go over there, develop an ulcer and eventually leave, I said, 'No thanks,' " Sheehan explained.
Americans and Iraqis, however, still face the mess produced by the White House's strategic blinders. If President Bush won't take the advice of men like Sheehan and Allawi, that mess will undermine the entire Middle East.